"...I'd need to begin and finish before anything worthwhile came of what a woman like me could do with a cheap paintbrush, four signature colors, and a decision to live with nerve."

This decision to live with nerve comes pretty quickly when Michele decides to leave her cheating fiance in Kankakee and move to New York.  Specifically, Manhattan.  To become an artist.  Something she's never done before.  Art. 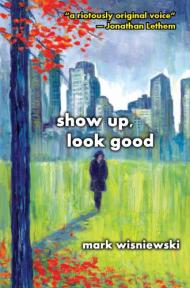 I know!  You're thinking, "I know where this one is headed!" Too many Country Mouse, City Mouse stories have made the small-town-girl-goes-to-the-city seem like a sad, predictable genre of its own.  Or maybe it was Crocodile Dundee II that did us in.  In any case, hearing the basic layout makes one think this young woman is going to end up as a serial killer's victim or a suddenly-discovered genius who ends up in a penthouse with a view, buying Jimmy Choos and designing a fragrance collection.  You just know beige leather sofas and clear glass vases of tulips are on their way.

So... you'd be wrong.  I was wrong.  There is nothing predictable or routine in this story of starting somewhere new and trying to reinvent yourself.  (Geez:  Just that previous line sounds as corny as the genre!)  First off, Michele is smart, and she's not expecting much.  She knows everyone back home is expecting her to fail, which propels her to succeed.  She's not looking for glamour; she's looking for a parking spot for her crappy Renault.  Her time is spent looking for an apartment, then a room, possibly a closet: anywhere to live and remain in the city.  That she's willing to bathe her new old lady landlord to instill "trust" shows her desperate need to stay.  The city means that much to her.

Making rent money is an issue, and she starts an innovative street business that has something to do with David Letterman.  She sells the Renault in a scene where you can't be sure if the perspective buyers want a test drive or just free use of the car.  Significantly, she meets an elderly man, an ex-Yankee, who gives her some guidance and life advice although he can't speak.

Between a fire, an audition for Stupid Human Tricks, and a job as a clerk in the world's most disgusting grocery store, she manages to survive.  She even survives a side trip to Astoria with a creepy new age couple who seem to be overly helpful--that she considers walking away from them an 'escape' is telling.

It's not all fun, and just when you are reading along and giggling, a transition takes place that smacks you down.  Wait!  What happened?  Could she be the subtle and evil villain known as the 'unreliable narrator'?  Things change, and now the story takes on a different aspect.  Same people, same places, but with a bit more information.  It's not as funny, but that doesn't mean it's diminished.  It's manipulative! It makes you reassess what has been happening so far.

"Then there's the reality very few people care to face: unless you have majestic beauty or power, your secrets rarely matter to anyone but yourself."   She said this in the beginning, but I didn't catch the ominous tone.  With the shift, though, comes even more suspense.  Who is Michele?  The breathless voice she's used to describe her adventures...was she holding back?  What secrets did we need to know?

This is a great read that went too fast.  I loved that it didn't play to type and that Michele never becomes that celebrity-wannabe that appears on every other reality show.  The only thing I don't understand is, what's so bad about Astoria?


Special thanks to Gival Press for the Advance Review Copy.
The author, Mark Wisniewski, is not just an ace writer; he
writes some of the most amazing poetry you're likely to read!
Posted by Amy at 2:55 PM