The Girl with The Brown Fur by Stacey Levine

“There’s such a terrible tension that exists between something and nothing.” 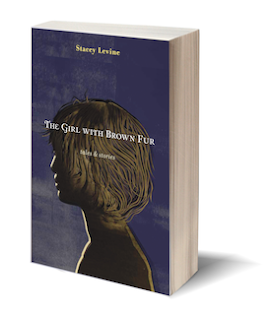 Such are the words of a tired nurse towards the end of one of Levine’s short stories, and it becomes a theme throughout this collection. All of the tales are unique, and not a single one complies with the reader’s predictions. Rather than being confusing, though, it illustrates the complexities that are present in everyone’s life.

The stories show a mastery of depiction—scenes are created that are completely unknown and sometimes impossible. So how is it that they feel so real? Because amidst the inconceivable lie basic truths. For example, in “Alia,” a young woman desperately wants a family. Yet her method of assimilating into the life of a friend goes awry. As her own personality submerges, she recognizes, “I was younger than I had been, I felt much older; and in the future, we would all become unimaginably older, diminished…”

“And You Are?” questions the identity of a time-obsessed woman who finds that merely going to the movies once a week makes life exciting. Her small-town life and her edge of hostility belie her words, as she reveals an unexpected insight (and possibly an explanation):


It’s these other sides that repeatedly surface, at times just as a glimmer, in these tales. Perhaps Levine has discovered that addressing these realities through the language of make-believe will make them easier to accept, or grasp. Maybe they’re not even meant to be accepted, but rather to act as a launching point into thinking deeper than we may find comfortable.

In “Sausage,” an improbable factory of upside-down bicycles makes sausage by enslaved workers. At the point of escape from the horror, one worker’s experience translates into a slanted commentary on the pharmaceutical industry.

“Let’s now look at all the shame you’ve ever endured and collect it together as in a little half-shell, so you can feel it all at once, along with the fallacies to which you cling, and then, perhaps, you will see yourself more clearly.


‘We will learn why you chose to take on the guilt of another, and why you wanted to be more free, and tried, sometimes, to escape into sleep, with the white tablets you so cunningly ground into powder…’”

As a whole, the collection of tales feels like an exploration of the disparity between the inner self and outer actions that frighten us. Does anyone really want to admit that their identity, if replicated down to the DNA structure, may not appear the same? This can’t be read quickly and set aside; there’s another dimension that I fear might be missed by the casual contemplation.


Special thanks to Ted Pelton of Starcherone for the Advance Review Copy.
Thanks to Daniel Casey, editor of Gently Read Literature, for the publication of the original review.
Posted by Amy at 4:30 PM