When I was writing Shadows Walking—I think I had finished the ninth draft, sometime in 2006—I tried to find a literary agent who would help me find a publisher. I sent out letters and got back over thirty rejections, most with relatively curt, impersonal replies. One agent, though, sent back a more detailed explanation. Aside from her criticism of my characters’ development and my plot—both entirely valid observations that I hope I have dealt with—she wrote, “Nazi atrocities are passé.” Needless to say, I was stunned. 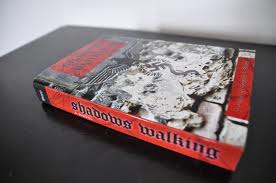 Aside from the fact that she turns out to have been wrong, based on the recent spate of successful books, films and plays on themes related to aspects of the Nazi regime’s rise and fall, what could she have meant? There were several possibilities, but each raised its own problem. Worst would have been that she thought Nazi atrocities were make-believe? As an historian who has spent uncountable hours in German archives looking at original documents, trying to unravel the labyrinthine dimensions of Hitlerism, and reading in the vast scholarship by dozens of responsible historians who have come to some understanding of the beast, to say nothing of my conversations, going back to 1960, when I first went to Germany, with men and women who were in a position to know what happened to them and to those who were, as a result of the regime’s predations, forever silent, I knew without question that a deliberate, state-sponsored genocide had happened. Arguments to the contrary are absurd. “Holocaust denial” is a centerpiece in the agenda of the age-old hatred we know as anti-Semitism.

If the Nazi state had only targeted one child—no matter what its ethnicity, nationality, gender, physical or mental abilities—it would have been a monstrous crime; adding up the Nazis’ victims to total this or that many millions does not make the genocide perpetrated on any of them proportionately worse. As John Donne wrote five hundred years ago, “Any man's death diminishes me, because I am involved in Mankind…” And some fourteen hundred years before Donne, we read in the Mishnah, the codification and explication of the ancient Hebrews’ oral tradition, that “anyone who destroys one soul…is reckoned by Scripture as if he destroyed the whole world; and anyone who saves one soul…is reckoned by Scripture as if he had saved the whole world….”

Perhaps the literary agent meant that the Holocaust was over-emphasized as a calamity? That other, more recent genocides deserved to be studied and publicized at least as much, or more, since that bloodshed is still fresh? I agree, the Holocaust was not the first genocide—and certainly not the last. As a teacher, I tried to tell my students that every page of our history helps us understand who we are and what we could be. It’s hard for me to imagine that we would not want to know all we can about what we have come to call the Holocaust, or about any such chapter in human history, especially the most recent ones.

I finally decided the literary agent thought that we were becoming dulled and made indifferent through “over-exposure” in the media and in our schools to Nazi atrocities. In education, this is what has come to be called “Holocaust fatigue.” You’ll instantly get well over one-million “hits” if you “google” the term. I can understand that an obsession with anything can be counter-productive. But how much attention is “too much”? Or to put the question differently, is there such thing as being “over-exposed” to the truth?

In March 2008, the German Foreign Ministry issued a report about “Holocaust fatigue.” Dr. Benedikt Haller, a ministry official, described the efforts in Germany to integrate a more detailed study of the Holocaust into the public schools than was earlier the case. At work were a newer generation of teachers, a more engaged and aware student population—thanks to easy access to more information than had ever been available before—and a more methodical approach to the teaching Germany’s history in the twentieth century. He feared that instead of promoting greater sensitivities, so much energy and effort expended on learning about the Holocaust was becoming counter-productive and leading to indifference.

In the United States, too, there is a wide-spread determination to teach more details about the Nazi regime and all its activities, driven in part by mandated curricular reforms, in part by the need to provide guidance to youth who can so easily gain access to misinformation. Depending on how this teaching is done, there might well be “Holocaust fatigue”—or at least an overload that can lead to complacency.

I know many teachers and have taught many students who have entered the profession. I have read widely in the textbooks that are being used, here and in Germany; in fact, I have helped to write chapters on recent European history, including the Holocaust, and/or served as an editorial consultant “on European history” for nine textbooks currently in use in the United States. In my judgment, if there is a problem, it is in the burdens we have placed upon teaching as a profession, not in the topic we are asking teachers to teach.

Our schools are painfully vulnerable to fluctuations in the economy. They subject to political pressures that have little to do with sound educational practices. Teachers just the same are asked to perform miracles: deal with large numbers of unevenly, often inadequately prepared students; help them resist or avoid the temptations of our distracting, pixilated world; deal with peer pressure pumped at them in an unprecedented way through social networking technologies; be focused under time constraints on subject matter that requires patience and skills—especially reading and writing skills—to interpret and comprehend it ; and, through it all, be of good cheer. If our students are fatigued, our teachers are, too—and not just in trying to make sense about the Holocaust.

﻿﻿
﻿﻿ It need not be this way, of course. There are proven strategies to avoid student boredom and teacher burn-out in teaching the Holocaust, or any historical topic. Making a good-faith effort to engage each student, based on his or her unique capacities—to become an active partner in the learning process—is, of course, the most important one. This means helping students imagine how life was in a different era, finding ways to help them tell stories about it, to make it a personal, fulfilling vision of what was, and why it was what it was. It means opening the student’s mind to raising questions that he or she wants to answer, rather than force-feeding answers to questions the student has no interest in exploring. It means acknowledging that names, dates and statistics are definitely not what history is about; instead, affirming that history is about real human beings, about all of us. It means that we must offer our students an opportunity to understand the context of the ideas we hope they will explore. We must be prepared to help them understand why perpetrators wanted to do what they did, and why victims behaved the way they did in the face of their tormentors. And we must be clear in what we expect to achieve in our teaching. In the case of the Nazi genocide, for example, I would want to help my students realize the consequences of choices and attitudes that foster arrogance and hatred. Then I would try to help them cultivate and express their compassion and empathy. A tall order for any teacher with any age-level of student. But the consequences of not doing all we could do in this cause, I believe, are terrifying.

Let me conclude with an excerpt from an unsolicited letter that I received from a 10th grade student who read Shadows Walking over the summer; I find it remarkable for the sensitivity and thoughtfulness it conveys (and I readily admit to envying this young woman’s writing skills). She writes,

“Thanks to the efforts of many who, like you, worked to keep the past in memory, the Holocaust is taught in school as part of the regular curriculum. I know that it has not always been this way, that some feel that history class should focus more on American victories than on such morbid subjects. Nonetheless, my classmates and I have studied the numbers, the statistics of the Holocaust. We have been taught the vocabulary, and have regarded the maps of German trains running from cities to concentration camps. But I could never understand the How. I envisioned Germany in the 1930’s as being full of skinhead-personalities: pre-occupied with war, and with questionable intelligence and no grasp of logic. How they managed to get control of an entire country, I could never figure out.


“Shadows Walking—leading me through the experiences of two men whose lives were eaten by the Holocaust—is the only thing that helped me understand, and reached me like no textbook ever could. I could too easily put myself in the shoes of every character, and see why they did what they did…. For the first time I see how a young person, just like me in every way except one, could see sense in such insanity. If I had not been raised in a culture valuing compassion and equality, I could have been one of the surly, mutilating nurses of the concentration camps.


“Your novel is in the genre of historical fiction. If I had never heard of the Holocaust, I would think it a ridiculous futuristic dystopia. I would have believed—I would still rather believe that you had made this all up. I would rather believe that the Nazis were not men but mannish machines. But I know that this happened in a country just like this one. That is why this book read like a horror story—not only because of the depraved individuals and inconceivable tortures, but because of the ominous message I found throughout the book. I don't know if you meant to write this between the lines, but your novel impressed it upon me deeply that this can happen again. That the Holocaust did not die, but is lying dormant in our society, in any and every society.


“With the 10th anniversary of 9/11 coming up, I am reminded less of that day than its effect on the world. Any person who looks vaguely Middle-Eastern is viewed with suspicion by many Americans. An anti-Middle-East and anti-Islam ideology has seeped far into our culture. Your novel has shown me that the ground is already laid for another movement powered by hate and racism. Though I do not think that anything of the magnitude of the Holocaust could happen today, now, I am uneasy. We speak of the Holocaust as if it is in the past, but the world is always changing. I wish I could be sure that my children, and grandchildren, and all of my descendants will never have to witness the horror you've written about, or feel like they are facing frontwards in a backwards society.”

I wrote Shadows Walking hoping for just such a response. Just imagine my joy in receiving this letter! I am deeply honored by this student’s—and by your—attention to my work. And I hope, like her, that you will find it worthwhile.