This is the first literary “mash-up” I’ve ever read…a newish format that combines classic texts with a modern twist. Quirk Classics have produced these, and Pride and Prejudice and Zombies and Android Karenina were early successes. I was a little hesitant at first, having found Kafka’s The Metamorphosis so intriguing.


In this mash-up, the anonymous writer “Coleridge Cook” twists Kafka’s tale of a man waking up to find himself as a bug into a tamer form: he wakes as an adorable kitten instead. Gregor as a cat experiences the same sort of issues as Gregor the bug, except that he’s more inclined to nap than scuttle around under furniture. 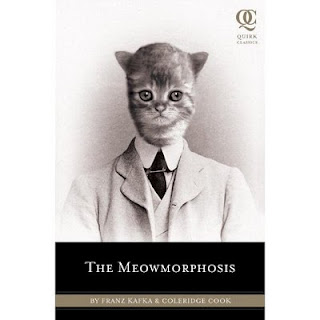 Staying fairly true to Kafka’s outline, it really does change the way you react to the scenes. It makes it wickedly funny to see his family react with such outrage and fear to what should be normal: a fat and lazy housecat. In this retelling, aside from his irresistible urge to sleep, Gregor does get out and has a run-in with some other cats. This ties into another Kafka story, The Trial, which I haven’t read but with which Cook is clearly familiar. I think I lost a bit of meaning here because I could sense that the names and actions of the other cats is important to understanding this version.  My friend Lisa Hayden discusses the important relevance between The Trial and Kafka himself in her review of the book and  read her explanation of the connection between both Kafka books at her blog. She’s smart like that!

"...which all led to the conclusion that for the time being he would have to keep calm and --with patience and the greatest consideration for his family--tolerate the troubles that in his present condition he was now forced to cause them."

"He had never acted according to his desires alone, but only according to the dicta of his kin, his duty, and that great filial ledger that ruled his life....That difference of spirit he had always felt on the inside was now evident on the outside..."

Now if you’ve never read The Metamorphosis, I think you’d enjoy this version for its play on images. Having read it recently, however, made me feel that the overall take from the story is just too different to get the same meaning as Kafka intended. For all of his images of absurdity with the bug, the idea of a man waking to find himself a horrifying insect was not the point of The Metamorphosis. What I took from it was more how absurd his family reacted and raised the question of why Gregor had put up with their dependence long before he turned into a bug. In this, the question is still there—but the cat contrast distracts a bit from the actual horror of his family situation.

I think this would be an excellent way to introduce someone to Kafka’s work, and since you can hardly find a book that isn’t described as “Kafkaesque” these days, it might be a good way start, as the majority of it stays very close to Kafka's telling.  The illustrations are a fun addition as well...who doesn't love a cat?


Special thanks to Eric at Quirk Classics for the Review Copy.
Also, their website has some great interactive toys if you are interested in more mash-ups.
http://www.quirkclassics.com/