The Brothers by Asko Sahlberg

Translated from the Finnish by Emily Jeremiah and Fleur Jeremiah

"I sensed that motherhood was terrible, perhaps sweet at times, but above all terrible.  Not because one human child would be more horrendous than another, nor is it so that offspring cannot bring joy when little and be useful when grown up, but because motherhood makes it possible for future generations to be rocked by dark tragedies." 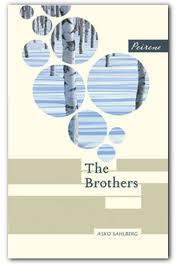 The Old Mistress in this snowy and tense Finnish tale reflects on her early impressions of motherhood, and what sort of legacy her two sons would be for her.  It's right that she worries, for she is desperately miserable in her desolate forest home, where she has to deal with "people whose speech tells you they have rough palms" as well as a sickly husband.  Added to this, she has furtive servants and two wildly opposing boys, Erik and Henrik.

Erik and Henrik are introduced as quarrelsome boys who end up on opposite sides during the war between Sweden and Russia (this takes place in 1809). (See footnote) Neither character is fully exposed, so the tension between the two is immediately apparent while the meaning behind it is delayed.  As the plot twists, the reader can see that this was intended...for the reader is given no easy clues to unravel the family's drama.

"...for a time I was able to watch the boys grow up with at least distant pride.  But boys are fated to grow into men, and a mother has to follow this tragedy as a silent bystander. And now it seems they will kill each other, and then this, too, can be added to my never-ending list of losses."

The character of their mother, the Old Mistress, is one of the most powerful female characters to be found in modern fiction: she has no saving grace that makes her likable or even necessary.  Her anger and rage doesn't make her a stereotypical obstacle: rather, she intrigues the reader and pulls out an interest in her that detracts a bit from the animosity between the boys. And author Sahlberg makes her a key to the plot-- a veritable loose cannon as the plot proceeds.

"I took up the habit of moving all the yesterdays and tomorrows discreetly to one side.  I have never deceived myself in this respect:  I gulp down spirits like a sailor".

Along with the Old Mistress, other characters speak in the first person voice, including both boys.  But while the world orbits between their opposite poles, another character begins to invade the literal and figurative world of the desolate farm.  This outsider quietly alters the lives of everyone involved, and controls the plot to its remarkable ending. 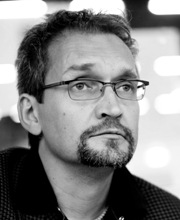 Several details of note:  the subtle writing definitely follows the rule of "show, don't tell".  Broken veins on the cheeks of a character are a detail not elaborated on, yet critically important.  Scenes between silent characters are so detailed that even without the dialogue, one reads an entire conversation.  These kind of details made me wish I could go back and read it again, slower, to catch the amazing writing that can capture so many variants of meaning with the same words, even the same characters, at different times. This subtlety seems to mirror the cold, snowy landscape.

I have to confess, I searched a thesaurus to find other ways to say 'tension' and 'subtle'!  I really can't emphasize the taut and bare style of the work enough without saying "tension" repeatedly.  So, let me just throw it out there:  tension.  Everywhere.


Special thanks to Meike Ziervogel of Peirene Press for the Review Copy.
The details of this war are fascinating (Napolean's in it) and this link details the events of the time as well as some rather ironic problems with uniforms for both sides (someone had the brilliant idea to experiment with changing colors and styles!).  An excellent background to the story:
http://www.napoleon-series.org/military/battles/c_finnish.html
Posted by Amy at 12:05 AM