A Persian Heart in an American Kitchen 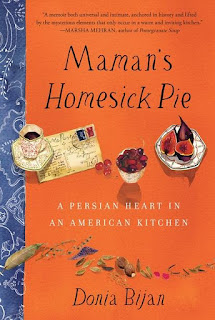 Cardamom. What IS cardamom, and where do I buy it?

This is one of the first questions to plague me as I read this memoir by Donia Bijan, an accomplished chef with a life story that is as fascinating as it is bittersweet. Initially, I hesitated before I began reading, as the last few memoirs I’ve read have been sort of “blah”. And when I saw that this book contains recipes, I thought that was a cutesy gimmick, as I once read a mystery that had recipes enclosed, which annoyed me to no end (yes, I get easily annoyed).

However, I curled up with it on a recent rainy day and couldn’t put it down. It’s lovely. Really. Bijan writes in a natural pace, and her stories brims with poignant details. It begins with the tragic death of her mother, and her task of going through her mother’s objects. The task is dreary until she finds her mother’s collection of recipes clipped from newspapers or on cards from friends. At this point, she finds the theme that ties her life to her mother’s: food. As a chef, the recipe cards she finds are revealing because they show how her mother, exiled from Iran, tried to adapt to American life at a time when being from Iran was a cause for suspicion.

Going back to the beginning, Bijan recounts her childhood experiences of living in the hospital that her father built. While he was a successful doctor in Iran (and devoted foodie on his own), her mother was head nurse and cook for the patients. Bijan and her sisters assisted their parents and were an active part of hospital life. The nature of food in that hospital was not simple of sustenance but of comfort; meals were designed to be shared, lingered over, and enjoyed as a communal activity.

After her parents are exiled, Bijan goes to school in the US and later to Paris where she is trained at the Cordon Bleu. As she remains close to her mother, her relationship with her father is strained as he envisioned a future for her more prestigious than that of a chef. Bijan works in the field, rising to the top of San Francisco’s cooking scene before deciding to return to France to work as an apprentice to hone her craft further. At all points of her story, food is always treated as a purposeful endeavor; the composition of a home-made meal the ultimate display of love and attentiveness.

The recipes included are those that tie into each story, and there is nothing gimmicky about them. Several I have earmarked to try. But nothing tops the story itself—it is heartwarming and genuinely lovely to read. Definitely a feel-good story and I seriously think it would be a great gift for a foodie friend.

It can’t be denied that Bijan’s life was one of privilege: her parents were wealthy and she pretty much was able to undertake whatever opportunities appealed to her. But her hard work and self-sacrifice keeps the reader from feeling that her life was an exception. But to illustrate, at one point she describes life in Paris where she is toiling under brutal teachers at Cordon Bleu:

“Most evenings, on my way home, I would stop to buy half a baguette, then heard to the fromagerie for a wedge of cheese I had never tasted, and finally go to the produce stand for a single peach, or two figs, maybe a tomato.”


Maybe that is supposed to sound minimal, but being that it’s Paris, PARIS (!!!!), it sounds impossibly elegant. In all seriousness, a fromagerie isn’t exactly in the strip mall in town. I admit, that single statement evoked much jealousy on my part, and possibly would on any woman’s part, because we know she gets to go back to her small but elegant apartment with a view of the Seine. In any case, the envy I felt didn’t diminish the book in any way. The reader sincerely wants her to succeed in her endeavors.  Highly recommend!


Special thanks to Michael and Kelly of Algonquin Books for the Advance Review Copy.
Posted by Amy at 12:00 AM