Of the collections of poetry by Manolis that I’ve read and enjoyed, Vernal Equinox is by far the most romantic and, shall we say, the steamiest. Perhaps the Greek mythological god Eros had an influence on this set of verses, although they wouldn’t necessarily be considered erotic. It’s said of Eros that “his quality of love was thought to be spiritual as well as physical, and was generally believed to be the deity who caused the love of beauty, healing, freedom, and many other good things as well as the love between people” (1). The Romans called him Cupid, and he was known for his quiver of arrows that struck often at random.


What is created in Vernal Equinox goes beyond just passion…this is no Harlequin poetry selection. Instead, the focus is on the feelings of both solitude and space that affection fills. The grace of companionship through difficulties, and the familiar grasp of a hand that soothes after a nightmare.

The Church is a frequent character in the poems, sometimes as setting and other times as a foil to the romance it seems to hamper. If anything, Manolis seems to contrast the pomp and drama of “grandiose” Church philosophies with the simplicity of tangible human affection. The addition of love changes the geography of the world in which we live, he seems to suggest.


Authentic affection isn’t easy to find, as lamented in some of the poems. It often disappears without a trace, or misses its mark. In one poem, “Peeling,” a lonely woman prepares a beautiful feast for her husband, craving just a bit of appreciation and affection. Yet his hockey game on television is where his heart is focused. In “Ambience,” the sense of transitory affection propels the words so descriptively you can sense the couple inevitably being torn apart:

Ambient solace of your
Embrace where I seek refuge


Your fingerprints tangle
My beard into rolled anguish

Stay—stay with this a while don’t
Disturb equanimity of


Day’s anxiety to hide behind
Our desired meditation on this

An infinitesimal fraction of
Time frozen or fiery

The juxtaposition of frozen and fiery in the final line seems to allude to heaven and hell, and cements the idea that this romance is purely earthly, and that neither participant wishes to move beyond any imagined heavenly reward or hellish punishment. Incidentally, I was curious why Manolis wrote “a while”’ and not “awhile” in the third stanza, and if it was significant. It turns out that yes, it does mean something: ‘a while’ is a noun meaning a period of time. This usage underlines the ephemeral nature of the intimacy between these two lovers (2).

Lastly, in “Search,” the contrast of harsh light with comforting shadow reinforces the nature of seductive affection and how we even see differently when we are in love.

You can’t fail to be stunned by sunshine still


Only harsh light without him by your side 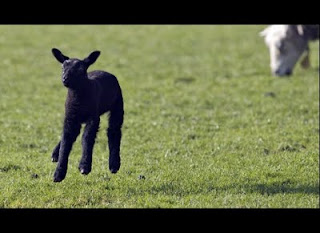 The title Vernal Equinox is most appropriate for such an assemblage of poems. It’s said that conception increases dramatically on the date of the vernal equinox (3). Perhaps it’s just a myth, but the concepts of rejuvenation and rebirth are linked to that date that begins Spring. Day and night are equal on the date of the equinox, which happens only twice a year.  The adorable sheep shown in the photo was born this year on the first day of spring, and I assume it's understood why I chose his picture.

thanks to Ekstasis Editions of British Columbia for the Review Copy.
(1) http://gogreece.about.com/od/greekmythology/a/eros.htm