See this sheep?  Doesn't it appear a bit confused?  Befuddled?  This is a bit how I feel after reading Dennis Barone's book Field Report.  It's a collection of essays (lyric possibly?) and short observations about all matters of life.  I actually liked it a great deal, but some of it left me feeling like the perplexed sheep above. 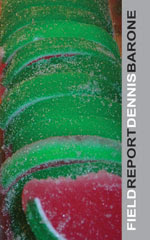 First off, Barone has a great voice--light, energetic, and with a subtle wisdom that doesn't come off as pretentious or self-important.  Some of the stories are humorous, such as "My Big Fish Story".  Another one is deeply emotional, "Communion Rites", wherein Barone shows how an ordinary event can suddenly be remembered as significant.  My favorite of all involves a trip he makes to Italy to try and locate the home of his ancestors.  Eagerly he journeys all over, follows paths to nowhere, getting lost, and ultimately, not locating the source of his search.  Yet, as he states,

"And what does the undiscovered house offer--an invitation to return, of course.  And I will gladly do so....I have no complaint.  I enjoyed my morning.  I liked the town.  My only problem will be my very breathlessness until the moment that I do return."

In another, "Immunity Radio", he makes some observations on media and what is the focus of society's gaze:

"Connections between the intense fear of age and the usurpation of fulfillment have created a euphemism for survival...By using the most horrifying story to organize a mounting demand for law and order, one merely dramatizes results.  Live surrounded by mirrors, seek to escape an imaginative state and neither art nor religion has so overwhelming an idee fixe....  Public experimentation corrupts an entertainment...."

The confusion I felt came from a few essays that I had not a clue what the meaning was about.  They felt like puzzles that I needed to solve, and couldn't.  I think I'll return to these later to try and grasp his metaphors and allusions.  In one, "Now and At the Hour", it felt like part war veteran hallucination mixed with an underlying theme of the work of a writer.  One phrase is repeated:  "...that ripping sound, one colon torn from a soldier's spine, a hand...."  At first I was thinking of physical violence as part of the veteran's memory, but the words ripping, colon, spine, and hand can all refer to parts of book-text as well as the physical book.  As I read, I couldn't make the two make sense in my head.

In all, it's an entertaining book that has the advantage of not leaving you 'finished'.  Rereading is certain to reveal more details and meaning.

One tiny and possibly petty other thing must be mentioned....the press release for this book was so over the top that I actually giggled at it.  It came off a bit Nicole Krauss-style...remember this gem?  As I read it, a part of me wondered if I could indeed ever read another book and not end up disappointed after the magnitude of this title.  Fortunately, the press release writer and the author are not at all alike, and Barone's book is very good, with none of that mega-hype being necessary.


Special thanks to Quale Press for the Review Copy.
Posted by Amy at 12:23 AM