This Way-Covering and Uncovering Tadeusz Borowski's "This Way for the Gas, Ladies and Gentlemen" 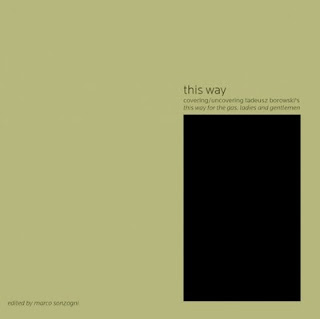 This art book takes on the Holocaust in an unexpected way:  by reviewing numerous submissions for cover art for the book This Way for the Gas, Ladies and Gentlemen by Tadeusz Borowski.  The range of styles and images is widely varied, all touching upon different nerves.  An editor would be hard-pressed to choose which one best represents what the book is all about.

As background, the collection of cover art also contains essays by six well-known scholars in studies of the time period.  Especially noteworthy are the essays by Berel Lang and John Bertram.  What is unique about their approach is instead of looking at the Holocaust from a more traditional approach, they examine how words and art were used as tools to influence attitudes and reinforce assumptions (as is typical even today).

"Hitler was a megalomaniacal artist intent on remaking the world, not only through murder on an unprecedented scale, but by destroying the ethical relationship between words and truth and images and reality."..........Liebe Geft, Director, Simon Wiesenthal Center Museum of Tolerance, 2011

In reading this, I learned stories of Holocaust bravery and resilience that I never knew, as well as the vicious effect on survivor's ability to restore normal emotions.  One essay by Alicia Nitecki, "The Man Behind Tadeusz Borowski's Prose:  Anatol Girs," details the biography of a Polish graphic artist who ended up in Dachau.  He ended up designing a book cover for one compilation in this way:

"Girs published the book in an edition of 10,000 copies and dressed most copies just as Auschwitz had dressed them:  blue and gray prison stripes, a thin white strip of cloth with the letter "P" inside a red triangle and next to it a number.  No title on the cover.  No author's names.  No publisher's mark.

He covered an unspecified number of the volumes, he notes in his colophon, "in 'stripes' cut from original prison uniforms."  He also covered a few copies in the leather from SS uniforms, and binding his own copy in barbed wire."  (This Way, 42)

Leaving aside the historical significance (if at all possible), the art in this book is compelling and fascinating.  I have it on a side table and everyone ends up browsing through it.

More info on the project that inspired the book is found at http://www.thiswayproject.org/.  The book can be purchased at that site or at http://dunmore.circlesoft.net/.