In between recent reads, my husband and I have gotten hooked on British crime shows.  I've always liked them, but now he's obsessed too.  The great thing about these series is that we don't know who is a famous guest star or not, so there's no hint to 'whodunit', as sometimes happens when you see the guest stars listed for Law & Order.  We've discovered these streaming on Netflix...

﻿ ﻿ Wire in the Blood is one that  features a sort of Monk-like character who is a blundering but genius psychologist. The characters are interesting but the stories are downright gruesome and just too gory for watching when you want to relax.  Ick.   Luther features an extremely tall detective (seriously, extremely tall!!!) who is trying to solve a murder while being stalked by the main suspect, and who most definitely lets criminals know how he feels.  The storyline carries over all the episodes in the series.  Very tense and fast-paced.   Sherlock is a series of three episodes that resurrects the Sherlock Holmes character (Watson is a Gulf War vet), and modernizes the stories to feature new technology. It's a shame that Sherlock is so incredibly annoying.  But all the props are there: the Baker Street address, Moriarty, etc.  MI-5 is by far the corniest, silly at times because it takes itself so seriously, yet it's still better than reruns of CSI  or L&O. 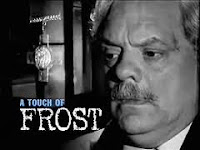 A few of the best: A Touch of Frost follows a cranky senior detective as he solves crimes around Denton, England.  It has an ensemble cast, and none of that annoying music video style production that CSI seems to have developed.  Another is Lewis, meaning Inspector Lewis, with two sort of bland actors as detective partners who actually kick ass in a rather polite and respectful way. Very mellow, very clean, sort of a vanilla crime show that is relaxing.  Collision is a five-part series dealing with the before and after of a major car wreck, with two detectives backtracking the activities of all the drivers involved.  Really, really good. 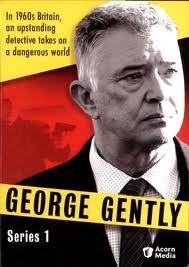 My favorite is Inspector George Gently, with two partners made of an aging detective (who remains dignified and sober even when he's furious) and his annoying young sidekick (who should be shot purely for his irritating habits, but they're just so darned polite they keep him on).  This is a fairly new series but it's set in Durham County in the early 1960's, and they have done something with the lighting that it almost looks black and white with James Bond-style music and retro clothing and cars.  Martin Shaw and Lee Ingleby are the stars and the writing is crisp and the detectives are flawed but compelling.

Another recent development is I've become hooked on audiobooks again.  A Visit from the Goon Squad by Jennifer Egan is a wonderful book, and having it read dramatically while I clean house or work on beading jewelry is kind of cool.  I'm also listening to Thomas Hardy's Tess of the D'Urberville's (read by George Gently star Martin Shaw) at night to relax before bed.  The Tiger's Wife by Tea Orbecht and Hardy's Return of the Native (read by Alan Rickman) are next in line.  There's something very peaceful about hearing a quiet voice reading aloud.  Years ago I had a lengthy project where I listened to John Le Carre's The Constant Gardener as I worked.  Today when I drive by and see the finished project I start remembering the story...they are cemented together.

If you're up for trying an audio book, Audible and E-Music both offer free trials.  You can also download an audio book right off Amazon to your MP3 player or PC.
Posted by Amy at 1:36 AM