How Did I Get Here by Tony Hawk (nonfiction)

The Ascent of an Unlikely CEO, with Pat Hawk 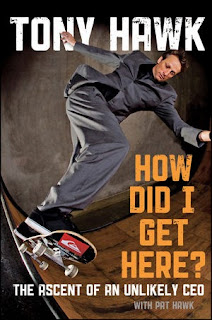 Having two sons who used to watch that awful show, Jackass, I know who Tony Hawk is, and can understand how he’s become such an icon in both sports and entertainment. How can you not like a guy riding a bike through a loop de loop, into the ocean, wearing a chicken suit? Not taking himself too seriously seems to be his attitude, and he explains how that has worked for him in this new book, How Did I Get Here? You can almost hear him laugh as he asks that, as his business smarts and wise choices have made him one of the wealthiest non-mainstream sports personas out there despite his low-key image.

As a franchise, he’s been successful, seeming to catch on to pop culture trends (like Twitter) early on and manipulating them successfully. Raising a family as well as his business hasn’t been easy, but mistakes that were made were usually overshadowed by successes soon after. A team mentality endures in Tony Hawk Inc., which sponsors skate boarding and other sports events as well as designing merchandise to market to fans. Some considered him a sell-out for selling Tony Hawk bedspreads for little kids, but he justifies it expertly, explaining that given the popularity of skateboarding, somebody was going to make little kids bedspreads with skateboards no matter what, so why not do it and make them cool? This justification goes on into his endorsement of numerous other products.

Going beyond the fame though, he also creates the Tony Hawk Foundation that raises money for different nonprofits and assists low-income areas to create community centers for skating as a means of socialization, positive peer influence (yes, but while he hangs out with Bam Margera!), and exercise.

So, does the book offer savvy business advice for other wannabe entrepreneurs? Not really-and it doesn’t intend to. Instead it’s more of a history book of the era of skateboarding, MTV, social networking, and hoodies. A snapshot of the time period, it is enjoyable to read but hardly in-depth. A fan would enjoy it, and he does give some valuable advice (although the generic kind). I found it a pretty light read but did enjoy seeing how a brand name is made and the challenges that come with what is essentially marketing yourself.   He seems a genuinely nice guy with refreshing honesty and candor, and that may be why one of his suggestions for success involves having good lawyers!


Special thanks to Wiley for the Review Copy.
Posted by Amy at 12:05 AM