“Everything is different when you have a coffin in your living room.” 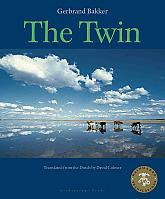 These are the kinds of sentences that fill The Twin: subtle, understated and crackling. This beautifully written novel shines with its character depiction of Helmer, a man who has made no choices in his life other than selecting the chickens for the farm. His home, the larger farm animals, his furniture and even his work clothes were passed on: choices that belonged to others.

However, the impending death of his father leads him to finally and uncomfortably assert his own will by moving the furniture, painting, and throwing out years worth of family relics. With this new and clean space, he finds that the things he can’t get rid of become more prominent. The house’s newly vacated space feels hollow, a reflection of the state of his heart and mind. He’s aware of his emptiness, and it’s illustrated when he buys a map to hang as “art” for his walls. The lack of anything attractive on the walls of his house makes the single picture lost and the emptiness all the more obvious. All he can do is look at the map and memorize the places he’d like to someday visit, an urge that seems impossible with all the burdens laid upon him since his teens.


He spends his days managing the meager farm, tending carelessly to his father and reeling from the thirty year loss of his twin brother Henk. For a time he allows a wayward teen to help as a farmhand, bringing new dynamics to his empty space.  The complexity of the novel isn’t simply the missing twin, that sort of story has been written countless times before. Rather, the theme is based on identity of self, not in relation to anyone else (his father or brother) but in the form of his own destiny. He appears to make no strides towards the independence he aspires to, and the contrast between his thoughts and actions creates a tension that is sometimes funny and sometimes brutal. Self-determination is an entirely unknown concept to Helmer, and throughout the novel you question if he ever can achieve it. Some could read a geo-political message in this, but I’d rather leave that out and focus on the beautiful writing and the descriptions that make you pause: in reference to an old log, “even a dead thing can be beautiful.”

A symbolism that is repeated throughout the novel is of a solitary hooded crow that stalks Helmer through the windows and around the yard, silently glaring. Since crows generally represent sadness or death, I thought it was appropriate in many ways.  Yet the way Bakker concludes the story, and accounts for the crow's presence, was still an unexpected surprise.
This title was translated from the Dutch original by David Colmer.  It is available at Archipelagobooks.org or Amazon.com.
Special thanks to Jill Schoolman of Archipelago Books for the Review Copy.
Posted by Amy at 5:50 PM