The Scandinavian Readers Challenge runs through year's end but many of the participants have completed or are close to completing it already.  So I'm pondering some future challenges, and would love some feedback. 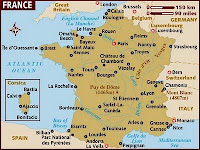 First, I was considering running a June only "Global Poetry Challenge" that would encourage reading of poetry, particularly lesser known or newly translated poets.  Rather than requiring a certain amount of reading, I'd ask participants to contribute phrases or quotes that they particularly enjoyed, and what they know about the poet.  Thoughts?  Interested?

Also, I've been chatting with Richard di Santo at Object Press about a future "French Translation Challenge".  As he describes it, it would "cover books originally written in French that have been translated into English, regardless of country of origin. The books could be from anywhere in the world, from any nationality, as there are a number of authors writing in the French language who are not French nationals (from Canada, Senegal, etc.)"  The great thing about a challenge like that would be that any genre could be included: crime, nonfiction, literary fiction and poetry.  It would also encourage reading translated works that are now being translated, and are more likely to be unknown by many readers.  New horizons, essentially.  Thoughts on this?  I would estimate it would start in September 2010 and run to December or into 2011, depending on response.  Please comment on your thoughts about this Challenge and whether you think you'd participate.

I had considered other challenges, but Australia is well represented in Challenges online now, as is many Asian literature titles.  Another option would be Russian translations (into English) or books about Russia...