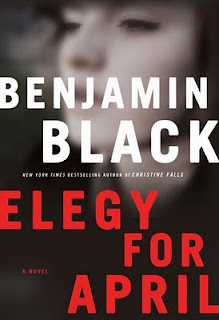 Crime fiction has no shortage of brooding crime-solvers, and it’s usually their vices and complications that make them so memorable. In Benjamin Black’s new novel, Elegy for April, the “facilitator” is Dr. Quirke, a pathologist who doesn’t investigate crimes as much as he observes the key players and encourages them to talk and communicate until the mystery is revealed. His perception and the way he moves people is the key to the solution, rather than typical detective techniques. Dr. Quirke is one of the most memorable characters I’ve run across lately, and this novel is an engaging read that constantly offers surprises and complications.


The biggest surprise to me is that it is not politically correct: Quirke is a raging alcoholic and the book begins with him leaving his treatment center, and he manages a few hours of sobriety. His drinking is stupendous, with blackouts and all, and yet the author doesn’t try and preach anything from it nor romanticize it. It’s a refreshing change that makes Quirke’s character that much more sympathetic. Other complications in his life, such as his relationship with his daughter and several women, also demonstrate conflict without resolution. He clearly doesn’t have all the answers, yet he’s able to help solve the disappearance of April with subtle questions.

Several things really struck me about this book, clearly an example of Dublin Noir. Sure, there’s rain in most of those style books, but Elegy for April features rain, sleet, mist, hoarfrost, fog, and drizzle. Black uses these weather features to illustrate twists to the plot and factors in the mystery, without ever getting cutesy or formulaic. Additionally, many scenes feature characters looking in or looking out of windows, and the symbolism of introspection and separation from the outside world is clear. This aspect of the main characters is especially telling, yet done subtly.

Lastly, the other symbolism in the story is the archetypical meanings of black and white, light and dark. Characters step into shadow, out of bright rooms, into shadowed corridors, under bright streetlights, and into gloomy booths. The contrasts between the light and dark are intertwined with the story and it creates an air of tension and suspense. Quirke himself uses the analogy of an ocean to observe:

“All around lay the surface of the ocean, seeming all that there is to see and know, in calm or tempest, while, underneath, lay a wholly other world of things, hidden, with other kinds of creatures, flashing darkly in the deeps.”

If this were ever made into a movie, I'd hope they’d film it in black and white to keep the feel and mood of it united. It’s set apart from other mysteries because much is left unresolved, as happens in real life. My only critique of it was that it ended rather abruptly after a tense buildup through the greater part of the book. I think I simply didn’t want to let go of the mood and characters. Altogether though, I enjoyed this and intend to seek out Black’s earlier books that feature Dr. Quirke.


Special thanks to Jason Liebman of Henry Holt and Company for the Advanced Review Copy.
Posted by Amy at 1:05 PM