Edwin lives in his bathroom. A rocking chair placed within is his world, and a nearby dresser holds his cups of flat soda and boxes of Orbit gum. The floor is wrinkled with wrappers, and while he’s blind, an overhead fluorescent light illuminates his miserable existence. Once an exacting businessman, overseeing a convalescent home of deteriorating elderly people, he now sits in his own waste, deteriorating slowly as he chews gum and has conversations with Death. Screaming at Elna, his wife, is his only source of distraction from his roving thoughts.

Siamese examines the inner thoughts and outer actions of this strange pair, in the most intimate of ways. Elna is so involved in Edwin’s death (as it is he is more dead than alive) that she lacks the most basic grasp of common sense, unless it comes to deceiving Edwin. Edwin glories in his demise, cataloguing each symptom and detail with relish. It’s almost as if his decay proves that he existed in the first place, because in his constant reminiscing he often tries to analyze if he really did live. His thoughts are random, vulgar, and filled with hate. He asks himself: “Where is this road heading? What will become of everything? Will the future be like what’s already going on in my head? No, the world’s still out there. Nothing ever goes away, it just accumulates. Especially for me, who can’t see worth a damn, yes, I just sit here with a head full of stupid pictures…”

It’s clear that even in younger days, Edwin was far from kindly. He treated the patients in the rest home with distant efficiency but secretly thought they should be suffocated in their beds. He loses his job just as his sanity lapses: he attacks a nurse. From then on his busy career fades into the small, smelly room where he ruminates about prior patients and coworkers and pleads for Death to arrive soon to release him from his thoughts:

“Take it all, I mean it, don’t leave so much as a bedroom slipper behind, annihilate me, smash me into kindling, into dust, then vacuum me up, leave no evidence, I don’t want to be remembered for anything…I long for you to come and beat my thoughts into submission…they’ve plagued me long enough, do nothing but torment me,…all they can think about, all they remember, is themselves…But I don’t want to think about them anymore…letting them have their way with me is a worse defeat than death.”

Elna, for her part, remains distant from Edwin, as his still breathing corpse is no company and company is what she craves. A broken light bulb, necessitating a visit from the building’s young superintendent, finally gives Elna a chance. And the malevolent force that enters their miserable life changes everything. 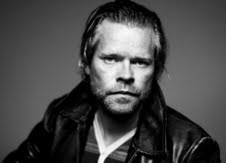 Siamese is not a mystery novel, but at times I had to remind myself to breathe as the suspense built. A character study of two deeply connected but polarized individuals, it is fascinating to read and see how their actions push each other into reactions that are both ugly and frightening. It’s also terribly frightening: the helplessness and lack of contact along with the certainty of impending death gave me chills.

I look forward to more books by this author, as the reading of this was a complete escape.  Not pretty, but definitely fascinating.

The novel was originally written in Norwegian and was translated by Stokes Schwartz.
Special thanks to Martin Riker and Jessica Henrichs of Dalkey Archive for the Review Copy.
Posted by Amy at 1:35 PM