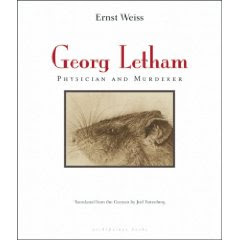 The classic symptoms of a sociopath are a wanton disregard for right and wrong and an inability to care about the feelings of others or the tenets of law or societal norms.  Most sociopaths can be defined fairly early in life by their behavior and attitude.
With this in mind, I began what I thought was a story about a sociopath.  In Georg Letham, Physican and Murderer by Ernst Weiss, the main character Letham is a classically trained physician who specializes in research in the distasteful specialization of vivisection.  In the initial chapters he confesses his role in the murder of his wife with no apparent remorse.  In fact, he only did it because he needed her money and she refused to "voluntarily" die of her own volition.  He complains about his wife and his father, both of whom held the key to his financial betterment:

"Neither of them could give me what I yearned for in the depths of my soul, but there was one medicine that they could have given me to ease my suffering:  the original medicine, money."

Circumstances after the murder unravel and his perfect plan fails spectacularly.  He ends up carted off as a 'common' criminal to a life sentence, a fate made more demeaning by the extremely high opinion he had of himself.  As he acclimates to incarceration and is transported to a tropical prison camp, he explains more of his childhood and more of his relationship with his father.  He reveals in slow and painful detail exactly what his father did to make him a strong man, and suddenly the diagnosis of classic schizophrenic becomes vague.  Because while he clearly was influenced by his father's hateful and moral deficiencies, he never outright blames him or uses him as an excuse.  He accepts all responsibility himself for his crime and also acknowledges his own moral failure.  A true schizophrenic never accepts blame.  Throughout this first half of the book to this point, the reading has been complicated and painful;  the details were horrifying and unsettling.

However, in his new location in the tropics, a change occurs in his life that confirms that Georg Letham is no sociopath.  He is allowed to work in the medical field again, this time doing research to find a cure for the deadly Yellow Fever that haunts the tropical regions.  A parallel is drawn between the rats his father abhorred and tried forever to eliminate with Georg's efforts to find a remedy for this similarly persistent and deadly danger.  While his father was led into the depths of moral depravity because of his inability to control the deadly rodents, Georg rises morally by putting himself at risk for the welfare of others by trying to have some effect on the deadly disease.  Throughout the second half of the book we see him change, yet he never transforms completely.  That would be too easy and too unrealistic.

A fascinating part of the text is the medical aspects of the study of disease, and how diseases like Yellow Fever are transmitted.  This is a far more interesting way to learn about biology than high school science!  No details are omitted in the search for a cure, and Weiss never dumbs down the medical language.  Reading about the treatment of criminals in the early twentieth century as well as the service of military doctors and their dedication in this time period is absorbing.

This is not an easy read.  Details of the animal testing are gruesome. His own attitude is obnoxious, but changes to more of a snarky sensibleness as events progress.  His father's heartlessness is painful, and many events are described so brutally that you may cringe and have to put the book down for a few minutes.  One thing is constant:  Georg is honest even when it would suit him to be less so.  And despite the difficulties, this book is something you can't put down and certainly won't want to.


Special thanks to Jill at Archipelago Books for this review copy.  This translation from the original German text, by Joel Rotenberg, is available at Archipelagobooks.org or Amazon.com.
Posted by Amy at 11:30 PM