“It doesn’t take as much to poison a horse as people think.”

“I might have won her respect. Or maybe she smells my acceptance of the truth that she’s tried to tell me all along. Some creatures are just meant to be left alone. They can’t be held on to, even if we love them more than anything.” 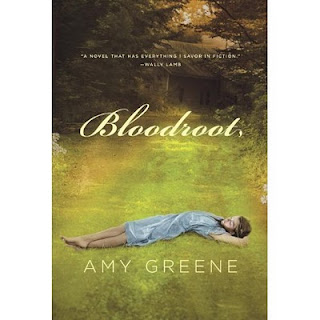 It is sentences like these that reach out and grab you , pulling you into this book, a stunning new novel by Amy Greene. The book is an epic story of several generations living near Bloodroot Mountain. It’s not a simple read, as you get acquainted with a large number of characters right away, and each of them has a compelling story. All the characters are complicated and deep, and at several points it’s difficult to know just how you are supposed to feel about them (Is this person a villain? Or just misunderstood?). Greene makes this draw you further into the book, because you never fully know as you read how you feel. One character may repel you and yet you feel drawn to them later.

The landscape and the flora and fauna of Bloodroot Mountain, as well as the other locations, is as much a character as the people in the book. Descriptions of damp caves, briar covered paths, and the flowing wild herbs make you shiver with the realism. The isolation of the mountain community is at times comforting, and at other times chilling. The level of detail is intense, and you can tell that the author didn’t simply imagine this place. It has to really exist somewhere.

Emotionally it’s a tough read. The characters suffer more pain than most, and at times I had to pause and stop because events unraveled so terribly. There’s also a high level of suspense, and at points I caught myself holding my breath as I turned the page to see what would happen next.  Details of the poverty, mental illness and distress are laid out plainly and painfully.

“I reckon I am ruint in a way. I can’t think straight no more. I forget the names of the craziest things, like flowers and biscuits and chairs. And you know I’ve buried five children and seen their dead bodies, watched them get sicker and sicker and not been able to help them a’tall, but the picture that vexes my mind the most is Myra when she opened the door of that house by the tracks. That’s the thing that’s done broke my heart in two, because she’s the one that saved me after all them others was gone. Myra’s the one I love the best of all, it doesn’t matter that I never bore her. She was mine anyhow.”

This novel has several remarkable qualities that make it unique. One is that when describing successive generations of women, Greene manages to make them have similar traits and speech and they all flow together as truly related. It’s as if she somehow created their DNA and sprinkled familiar bits about, so that each woman is different but undeniably made of the same stock. Another feature is the use of foreshadowing. Some authors lay the groundwork for an important detail, then come back to it later and make the loop complete. But Greene lays down details that come up again, not once, but several times, making the details interlinked like a delicate chain.

This is an intense read that is best enjoyed when you can concentrate on the characters.  Enjoy!


Thanks to Lauren Helman at Knopf for the Advanced Reader's Copy.
Posted by Amy at 12:32 PM