You Will Never Find Me by Robert Wilson (Europa World Noir) 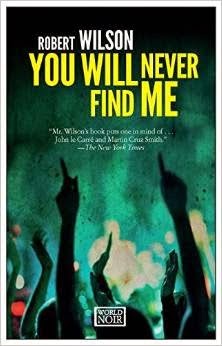 I was so disappointed with this novel. I normally love Europa Edition's World Noir series, and I've read every single one of Wilson's novels, so I was primed for a great read. Which this was not. I am going to try and explain but it's tough to describe some of the issues with it:

1. Mercy and Charles are back, and while both are complicated individuals, they act with a distinct aloofness that even extends to their daughter. When she runs away, they don't seem realistic in their actions.

2. All the remaining characters are either all bad or all good: no moral ambiguities. El Osito is evil, yet, but not much more than that. The other cops, the inevitable Russian connections, the drug dealers and the fences are all just one-dimensional and don't change at all during the book. This makes for very little tension.

3. The plot is ALL over the place geographically, which is fine, but the connections between places seem tenuous. No one misses a plane, everything runs smoothly, surely Wilson knows that never happens. No one runs out of cash, everyone meets up as planned, there's not a single wrinkle in anyone's plans.

4. Besides the Columbian drug dealers and the UK dealers making a deal (with surprisingly financial savvy even for the lower tier sellers), we have a Russian side plot that makes no sense at all. Wilson is trying to drag in the poisoned Russian spy from real life into the novel and it's too much. A side kidnapping serves no purpose to the main story of the daughter running away. Maybe it was to appear complex, but it seems like when a novel has an open spot many authors toss in a Russian and a execution to make it appear topical. Instead, it was a yawn. The entire Russian portion of this did not further the plot at all.  Additionally, the behavior of the father of this other kidnapping is just off-the-hook: he truly calls the shots and makes the police look ridiculous. HE was interesting, the rest were laughable.

5. Peripheral characters like Esme and Isabel and the Spanish detective were interesting but unexplored. I suspect the Spaniard may appear in his own series in the future.

6. Hugely emotional moments regarding life or death matters are treated with an "okay, then"reaction rather than real human behaviors.

7. Without spoilers, I have to say the final scene was completely ridiculous. It made me laugh it was so implausible and yes, corny. To the point of cheesy. It suddenly felt like a Hugh Grant movie ending.

8. Finally, most people who have watched any crime show on television know the rules: always look behind you, never leave an assumed dead body with a weapon nearby, and never stop to chat while being chased.  Yet most of the characters commit these silly mistakes repeatedly.  Gah!

Aside from this, Wilson's other novels are FAR superior.


Review copy received from Europa Editions.
Posted by Amy at 9:00 AM