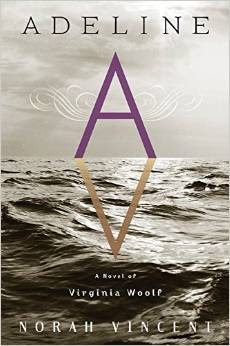 Norah Vincent is trying to recreate the days leading up to Virginia Woolf's suicide, when she put stones in her pockets and waded into the Thames. To do this Vincent had to get into the mind-set of Woolf, to put herself in her position in relation to her husband, her house, her memories, et al. At first I was intrigued. Woolf never had an easy life, and people were much tougher then.

What got to me was once in Woolf's mind, I didn't really want to stay there. I'm not sure how much of this is imaginary thought process is based on fact, surely some is. But for the most part, assuming to understand someone's mind, especially someone who clearly has a mental illness, is problematic. The author does reference bits and pieces of Woolf's work (she's clearly done her homework), but much of it felt generic. Generic depression symptoms, when depression really is never generic. To be frank, I got bored. I realize this was fiction, a novel that isn't supposed to be real. Yet the premise has to connect somehow with real life, or why read it? I'm not sure it could stand apart as a novel of any woman, it's clearly tied to Woolf. Yet taking that liberty means we have to assume it's somewhat accurate.

In some scenes, she takes perhaps a five-minute action and extends it into ten or more pages of Woolf's thought processes.  Intriguing to consider, but it makes for a very slow read that doesn't feel cohesive because such little actions are expanding upon so greatly.

I did notice that some parts are written much in the same style as Woolf's work, as if her thought process was exactly the same as Mrs. Dalloway, for example. (The flowers, the flowers!) But Dalloway was a character, not Woolf herself. Right? I can't picture all of Woolf's women characters being a version of herself, as they were all so unique. Except that one in To the Lighthouse who annoyed the heck out of me.

I normally quote lines in my reviews that I think are engaging or telling to the style. I found none to mark in the book that struck me as exceptional, except for a few zzzzz's scattered about.

In any case, for a Woolf devotee, this might be a delicious way to curl up and imagine more.  Maybe it's guilt: as a teenager I was forbidden to read Sylvia Plath OR Virginia Woolf by my mom.


Review copy provided by Amazon Vine.
Posted by Amy at 9:00 AM