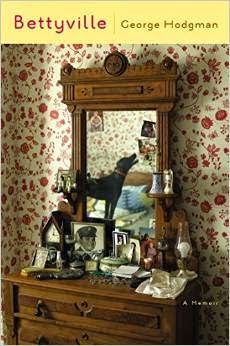 "Nor is she sentimental. Inside a silver locket she has worn for years, a gift from my father, are the stock photographs of the strangers it came with."

Inside those two sentences George Hodgman has created an instant picture of his mother, Elizabeth. A writer, he's returned home to care for Betty as she begins that slow, desperate decline. To say she's eccentric isn't enough, so Hodgwell shows us via the visual. To say she's a spitfire doesn't even begin to describe her....she's a tortured soul who he finds moaning in anxiety in the afternoons but cracking jokes at dawn. The disparity between the humor and loneliness is familiar. But her loneliness is not one to be solved but to be reckoned with...just because he's come to town isn't going to change her nor the course of that lonely path.

Hodgman's own life is fascinating; how he interacts with her in her rural Missouri, far from his home in New York, is a testament to family duty combined with family love. Even while that family love may not be of the Hallmark movie-style. Small town life sounds really good in this, described faithfully, even in his loathing of Walmart.  I really liked how Hodgman describes events and people,  especially in this setting, and especially of his mother:

"By the time my mother realized that she was smart or saw she had the kind of looks that open doors, she had already closed too many to go back."

I loved that line. As a writer and a reader, it's perfect. Many, many like them appear in this book.

Between their conversations and recognition of themselves in each other, they find a new closeness different from his early years as an only child. Burnishing that relationship is a landscape many of us can't relate to: rural hills, church suppers, and the existence of "bric a brac". The times they drive together are poignant. On one eventful night, they accidentally hit a deer (whom Hodgman describes as "... deranged. It hated its life)  while driving fast in the dark to get her to a bathroom. "This is a woman who can treat the transmission of a common cold as a tragic twist of fate, but crash into a creature who you fear is Bambi's papa and you will encounter a soldier prepared the storms of Normandy."

And yet, despite her decline, it's not terribly sad.

Oh. Actually it is. It is sad. The loneliness she feels that he expresses is piercing. With a parent in the same position (and being a caregiver child myself), I ache at some of the familiar scenes. I read it fairly soon after reading "The Long Goodbye" by Meghan O'Rourke, another gorgeous and thoughtful memoir of the loss of a mother. Both underline the very seed of our lives, the child grieving the parent, occurring often long before their actual death.

But it goes beyond the idea of caregiving for a into a more intimate path of caring for ourselves.  Hodgman gives up a great deal to be with her, yet he also gains.  He sees the small town life from a different place than when he was a child.  Additionally, it touches on his struggles as a gay man whose parents don't really accept his identity.  Rather than anger, he reaches another point of acceptance tempered with disappointment. Who he is becomes the subject just as much as who Betty is.  The child not wanting to disappoint his parents, those of that older generation who prefer to avoid uncomfortable subjects, remains in the man who loves his mother for exactly who she is.  Even if she cannot fully accept who he is.  He's there for the long haul, regardless, as he says,

"I am staying not to cling on, but because sometime, at least once, everyone should see someone through. All the way home."

So, it's heartbreaking. You will need tissue. You will laugh. And you just might hope you get a chance to be there for someone, to be that "other piece" for someone when the puzzle is completely undone.  Most of all, you may find yourself marking up the book to highlight special quotes.

A few of these, just to illustrate his beautiful writing:

"People forced to live by conventions are always the first to enforce them. I think this applies to my mother. A practical investor, she bought stock in the usual choices because they ordinarily pay off without risk or pain. She never imagined they could betray her or that anyone close would break them.  Never a practical investor, I have always gone for the crazy horse."

"I think people who have always felt okay in the world will never understand those of us who haven't."

After I read this, I turned to the beginning to read it again. I've become an evangelizer for this memoir. My mother and husband have read it. My English professor has dibs on it next.  I am hoping it wins a National Book Award like Patti Smith did.  I hope it becomes as well known as Paul Auster's journals. I hope it gets a PEN award. Anything that will get people to read it and see that throughout love and loyalty is a simple connection to Little Debbies and a casserole left on the front porch.

If it interests you, the author's website features pictures of Betty, George's father, and some of the other family mentioned extensively in the book.  Oh, and pay attention to the cover: it features some little details mentioned in the book.


Review copy received from the Amazon Vine program.
Posted by Amy at 10:05 PM