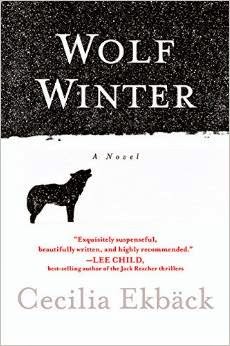 One of my favorite books ever is "Growth of the Soil" by Knut Hamsun, and I kept thinking of it as I read this novel.  Much of the region of the Lapland is similar, as are the descriptions of the earth, soil, sky, and water.  Ekback makes a strong presence as she is careful to "show" and not simply tell the reader what the story is about.  At one point she describes how sometimes the light outside is painful to observe and bodes ill: I could really sense what she meant.

For example, early on we learn of the husband of the main character.  There's nothing outwardly said in the description to make us think he's weak and somewhat lazy....just her choice of dialogue and scenes make it apparent instantly.  I really liked the character Maija, and she feels very real as she arrives at this new land with her helpless husband, trying to make a new life while a murderer is on the loose.  Characters are introduced individually, with time given to evaluate them by their actions and dialogue, almost to create a familiarity with them, which makes the mystery much more complicated.  Complicated because we've become almost attached to each character because of the personal attention given to each one.  In shorter words, there's no obvious villain that sometimes is easily picked out of a narrative.

The priest, "Olof", as she nicknames him ("oaf"to me) is a perplexing character early on and one of the forces that drives the story in a way that is new and unique.  I had a love/hate relationship with him as he's in many scenes and even when he's doing something good or beneficial, he's annoying.  Another big revelation was how the Church worked in this time period, where the concept of "it's who you know" being hammered in with details of corruption and omission.  I also liked how Maija's pragmatic character clashes with Olof's self-righteous performances.

You can't help but feel a bit of a chill while reading this; perhaps it would be best read at the beach as I think the Swedish location, high in the hills, is probably never warm.