Translated from the German by Leila Vennewitz
At a pub before evening mass, Heinrich Boll observes a shrewish woman harassing and threatening a hungry child that she thinks is using too much vinegar on his chips. By chance Boll notes that "the savior was approaching"...a banged-up brute who pretends to kiss her hand, offers her a ten-shilling note, then interjects, "May I request you, Madam, to regard these ten shillings as sufficient payment for the six drops of vinegar?" 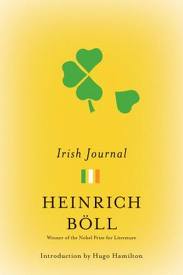 The woman takes the money, embarrassed, and the man left her with one last reminder, "May I moreover remind you that it is time for the evening service? Please convey my respectful regards to the priest."

Oh snap.  Such a moment captured is one of the unforgettable scenes in Boll's Irish Journal, a collection of essays he wrote about his visit to the Emerald Isle in the 1950s that comes across much like a love letter to the Irish people.  In the event above, he doesn't just leave it at his own observation, he brings it to the reader's consciousness, by making us wonder about the benefactor:

"The man who lives poetry instead of writing it pays ten thousand percent interest. Where was he, the dark, blood-stained drunk, who had had enough string for his jacket but not for his shoes?"

Just outside, in the same scene as above, he depicts the buildings:
"King John's Castle reared grimly out of the darkness, a tourist attraction hemmed in by tenements from the twenties, and the tenements of the twentieth century looked more dilapidated than King John's Castle of the thirteenth; the dim light from the weak bulbs could not compete with the massive shadow of the castle, everything was submerged in sour darkness."

The image he creates mixes characters caught between faith and tradition and modern change, yet still capable of vast generosity in the face of poverty.  Anger mixes with empathy, and somehow the way he connects the fight over "vinegar" to the "sour" light makes it contain so much depth.  And of course, the bum's reminder to the woman about mass, a dig at her less-than-charitable spirit, shows how Boll could see the irony in the situation.

Many of the images that Boll writes about are not far off from our pop culture image of Ireland, a place romanticized by many as a place of quaint cottages and endless green.  (Those of us unfortunate enough to have seen the film, PS I Love You have further embellished that image with scenes of Gerard Butler and Jeffrey Dean Morgan meandering the countryside, spilling charm everywhere.  Neither of whom are Irish.) Having come off a semester of Irish Studies, I realize that the reality is far different, yet the timing of Boll's trip and his ability to write about the people of Ireland without delving into the politics make this a lovely read.


In "Skeleton of a Human Habitation", Boll writes of the abandoned village he discovers on a walk with his family.  "Everything not made of stone gnawed away by rain, sun, and wind--and time, which patiently trickles over everything; twenty-four great drops of time a day, the acid that eats everything away as imperceptibly as resignation."  He describes the village much as a human body, with spine and heart and limbs--he puts the church as the head.  He observes that the town has been left alone and not plundered, and how the doorways and walls, while decrepit, still remain.  Only his own children, outsiders (the Bolls are German), attempt to raze what they can.  It seems that he's making a distinction between the identity of a nation towards its own things, and notes that "this, then, is what a human habitation looks like when it has been left in peace after death."  How many places permit this return to the soil?  Is it perhaps that the soil feels alive, a dignified presence deserving of respect?

Boll draws attention to generous train conductors that help out when they can't change money, and good-hearted people determined to help without question when they are short on funds.  He even describes something quite new to me:  the private drinking booth.  Inside it's leather curtain, "the drinker locks himself in like a horse; to be alone with whisky and pain, with belief and unbelief; he lowers himself deep below the surface of time, into the caisson of passivity, as long as his money lasts; till he is compelled to float up again to the surface of time, to take part somehow in the weary paddling: meaningless, helpless movements, since every vessel is destined to drift toward the dark waters of the Styx."

Incidental details make Boll's journeys rich, and he describes them in a voice that is simple and clear.  I say that because I've been recently reading other German authors, namely Bernhard, Kafka, and Trakl, and at times I feel frustrated by my lack of understanding.  At the time I was reading this, Irish Journal, I also read Boll's The Bread of Our Early Years, just to see how different his memoir voice was from his narrative voice.  Both are deep reads, full of subtle clues, yet with surprisingly uncluttered prose.  Fortunately, Boll wrote a great many titles, and I'm eager to delve into more.

As a side note, I found it interesting that the translator was the same for both books.  This led me to discover that Leila Vennewitz was pretty much the only English translator for Bolls, and received numerous awards for her translations.  In an interview in 2006, she stated that "she had always wanted to be a translator, she never made a major blunder in her work, she never had much trouble with editors and she preferred to take her time on each project. Vennewitz preferred to view the translator as "the boss," not unlike an orchestra conductor. She never had an agent and she pioneered the ability of translators to gain copyright for their own translations. She maintained she had always followed the early advice of a fellow translator: "Be bold." (BCBW 2007 archive, "Translation")

It should be said that while the essays were written in the 1950s, he did add an Epilogue dated 1967.  In this, he does acknowledge more of the political problems that were developing and the change present all over Europe, but seems focused on not taking a political position.  He has a bit to say about how the birth control pill will change Ireland, and it struck me as a bit unexpected, maybe naive.  Because of his love of all things Irish, especially the children, I wonder if he was heartbroken when some of the little children he so admired died in hunger strikes years later.  How pained he must have been.

From this all, of course, Ireland is still number one on my wish-list destination, and Boll's personal biography is the next thing I'm going to hunt for.

Special thanks to Nathan at Melville House for the Review Copy.
Posted by Amy at 1:19 PM