A Good Fall, Ha Jin, a collection of short stories 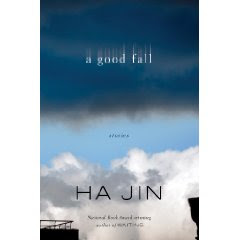 This book is a collection of short stories about Chinese immigrants and their new experience settling in New York. Some are relatively new transplants, while others have been in the US for many years. The process of immersing self into a new culture and place, while retaining cultural traditions and personal beliefs, is complex and bewildering to many of the characters.


The first compliment has to go to Ha Jin’s prose: clear, clean and crisp. Each story is astonishing in its simplicity, deceivingly so. Because none of the stories and life experiences are simple. He writes beautifully, making you care for this odd mix of people so much with so few words. I appreciated how he didn’t feel the need to over-explain the complications, he’s expecting his readers to have some basic knowledge about Chinese culture. Yet he still adds nuances of depth to these characters so you come away with new understanding of them and their plight, both individually and collectively.

For example, the Chinese have the well known reputation for respecting their ancestors far more than the American norm. While assimilating into American culture, some walk a fine line between behaving like everyone else or staying close to their cultural heritage. It’s not simple at all. An overbearing mother appears for the most part to be an obnoxious insertion into her son’s life, yet she is behaving in the norm. What is fascinating is how he relates to her, trying to respect her and her value system while keeping the peace with his wife. In the end, he makes a painful choice, because the two cannot be blended. Grandparents clinging to their past battle with grandchildren who only see their future, and in the middle a couple try and maintain respect and reasonableness for both generations.

In “A Composer and His Parakeets”, Fanlin finds that his new role as pet sitter for his girlfriend’s parakeet has more depth and meaning than his relationship with her. He finds inspiration, as well as happiness and contentment, by simply caring for the small needs of the little pet. He realizes that just as she had pawned the bird off to him, soon she would leave him. As he composes, his work actually improves significantly as he can openly express himself and not hold back

“The Bane of the Internet” shows the suffering of a newly immigrated woman who has to deal with the ease of keeping in contact with her family back home, one she thought she had escaped. While I laughed at some of her plight, the reality of her complaint is all too true.

In “An English Professor”, we watch a fully competent Chinese professor drive himself insane in his attempt to get tenure because he finds a typo in his application. The lengths he goes to in his desperation and pain, his paranoia and his lack of confidence are by turns humorous and tragic. Underlining it all is the intense drive to succeed and to save face, a theme that runs through many of the stories.

A few things surprised me. In immigrant communities, the newspaper business is still alive and well, a collection of news and trivia and anecdotal events that serve as background and a connection to culture. I found it fascinating that once immigrants have entered the US, they eagerly seek association with other immigrants from their past, even if these ones were not of their previous ‘class’ structure (who they would never have sought out back home). Their focus on financial and social standing remains, yet they desire to gather as family members to interact in the old ways.

As I read, I kept thinking of the phrase “what to keep”. Every single character in this has to make that decision, in small decisions and in large, in order to get what they wanted from the new land and remain faithful to their values. Ha Jin illuminates the complications and makes these lives and decisions of these ordinary people a fascinating chronicle of personal sacrifice.


Special thanks to Pantheon Books (Knopf) for the Advance Review Copy.
Posted by Amy at 5:12 PM