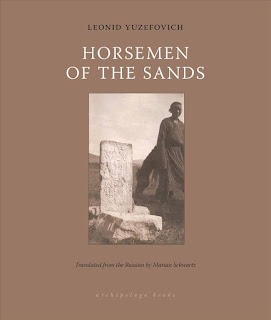 
Translated from the Russian by Marian Schwartz.

This translated fiction novel combines two stories by Russian writer Yuzefovich.  Both are compelling, but "The Storm" is absolutely riveting and electric in its storytelling.

What begins as a simple premise ends with a nightmarish scene of emotional pain and torture, with the author echoing in fiction the actual truth of the lives of many Russian children.

The Storm begins with a teacher relinquishing her class of fifth-graders to the expertise of a guest speaker, a man who ostensibly is there to teach the children about traffic safety. Surely, a dry and uninspiring prospect for the children.  However, as he begins he realizes to gain their attention he must create anecdotal events to push his message about safety. And, as any predator does, he seems to be able to suss out the weakest and most emotionally fragile students to use in his teaching.

These students are mystified and frantic as they try and figure out how he seems to know their weaknesses: one, a daughter of a drunkard, the other, a recent accident victim himself.  While he smiles and gesticulates, he is actually stabbing them with many pains.  Both try to flee the classroom.

While this goes on, their teacher gets a needed break and leaves campus temporarily. Her outing goes poorly as she is faced with her own hypocrisy. Her sense of privilege is attacked.  A principal too lets his mind wander into dangerous territory. Even the school janitor experiences an epiphany of sorts while the children are suffering back in the classroom.

The weather becomes the driving force, as lightning and storm clouds gather figuratively and literally in the city.  Everything becomes off-kilter, yet the traffic instructor continues his attack. He is clever: nothing he says is really wrong or could be construed as emotional abuse.  But it's beyond his speech that his evil pathology lies.  Like a crocodile, he contently observes the children, eager to prey on someone weaker.

This story could stand alone in the novel.  However, the second story was far less compelling for me.  It is different in tone and style from The Storm.

Horsemen of the Sands is complicated and wearying.  While it is of a Russian who invades Mongolia, and who uses Korean men as his guards, the narrative switches frequently leading to much confusion.  The landscape is described in artistic ways, but the interaction between characters leaves many questions and frustration.  I've read much in the way of Russian literature and this simply did not entice me.  I felt like I needed to know more history and crave less action.  Yet, the premise itself seems like it would be action-packed.  I could not follow the story enough to comment on it further.
Posted by Amy at 11:05 AM