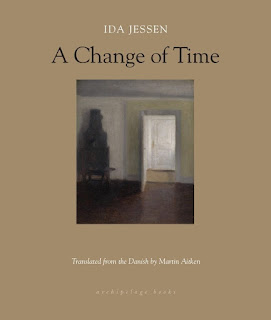 Translated from the Danish
by Martin Aitken

This novel seems spare at first, with dry journal entries from a recently widowed woman. However, about midway through, you see a shift and realize that "spare" is the last thing this book is. Instead, very subtle depth is created with the minimal expressions she uses to write about both her marriage and her newfound single life.

At first, I thought it was a character study of a marriage: an arrogant and aloof husband and his somewhat plain wife.  I learned about both of them through cautious comments and descriptions. However, it changes when Halloween approaches. On that date, the woman creates a story for the holiday (at first, the story is confusing out of context).  The story she tells is mysterious with suspense and confusion.  But after I read the Halloween story, I realized, she wrote it to be read. She wrote it for a reader. Thus, if the story was for a reader, was everything else intended for a potential reader as well?  And if so, does that mean her journal was less about chronicling her marriage and loss, or more about creating a narrative? Enter here the unreliable narrator: what exactly is true or false about what she is saying?

With that perspective, I started the book over. This time I focused on what was her opinion and what was fact, which can vary significantly. This made it even more complex and layered in depth.

It's important to watch the dates of the journal entries. They are significant.  Additionally, after the Halloween story she shares more details about her life before marriage.  And these details complicate the narrative further. The reader is bound to ask, why exactly did they get married?  What did she see in him?  What did he see in her? Neither of these questions are explicitly answered. Instead, we learn of another man who appears before and after her marriage. Two other men, actually.  Who is she, really?

In other aspects, her descriptions of small-town life and neighbors and the nature of a schoolteacher are equally charming and yet mysterious.  Why is she not 'one of them'?  Do the townspeople know more about her than we do, as readers? Perhaps, as her story suggests that she's not telling us everything.  And that omission becomes a fascinating focal point.

I loved the minimalism of the story. It forced me to pay attention and use my imagination to fill in the gaps. I highly recommend this elegant story of love, loss, and keeping secrets.
Posted by Amy at 10:43 AM