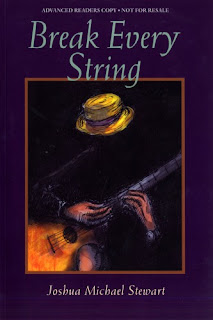 In his new book, Break Every String, Joshua Michael Stewart rides shotgun on a trip through the back roads of a small town called Everywhere.  Imagine him sitting there, unfolding an old, worn map of the region—so old that it feels like chamois—and featuring all the tired places encompassed there.  He may point to a lake, a school, abandoned wells, and homes stuffed with stories.  In his own measured pace, he’ll tell you about those places and why their significance goes far beyond the map could ever show.  This isn’t topography or simple street intersections, this map is a history of a person, a family, and pain.

Stewart doesn’t overshare. He’s subtle with his explanations, and doesn’t quite tell you the whole story. He leaves you with more questions than answers.  But the search, the listening, is the treasure of these poems. Epic stories are told, spanning several poems. And then there are simple phrases, stunning in what they reveal.

A blackbird in crosshairs, singing.

For example, the women of this town, this history.  They are tender, murderous, hateful, or simply invisible.  A brother is alluded to many times, Frank, and his story is told in broken shards that perfectly represents his jagged life.  Frank fights addiction, a broken family, a stint in jail—all working as parallels with the life of the man Stewart describes.  It’s not necessarily autobiographical, but rather a complex amalgamation of character studies.  You never quite know the whole story.

A large part of Stewart’s poems feature letters from mother to son, keeping him posted about the “other” brother. The inference is clear: the other son occupies her thoughts; the broken bird getting more attention than the one in flight with wings aloft.  The pain this inflicts is never mentioned only surmised.  And one that finds our narrator at a loss with his own worth.

You haven’t had the blues
Until your mother drunk-dials
Your number at two o’clock
In the afternoon and leaves
A message for your brother
Who’s been dead since 2007.

Coltrane and Brubeck serve as tonics in this town that maybe should be called Nowhere.  A place where Stewart asks, “What’s the narrative in a still life or a landscape?”

Some moments are universal but no less profound:

When someone leaves
Your life, you’re left with a story
You’ll fetch from your minds library

When sleep eludes you and you sit
In the quiet of the kitchen, surrounded
By the dark and empty rooms of self.

And at times, the contemplation takes a troubled, introspective turn:

I’m not interested in last words,
But in final thoughts. Do you love
The most the one you think of last?

The most intense poem of the collection hits me hard each time I read it. I actually have it pinned to a wall.  I Wanted to Be a Blue Jay or Wear a Flowered Apron tears me up.  It’s almost the perfect poem, except that I don’t want to accept that the perfect poem has already been written. Much like Ginsberg’s Supermarket in California, it has so much dimension and depth that one could get lost in all the allusions and meanings, as well as get smacked by the simple reality of the words.  Take it straight or read something into it: in either case, it’s brilliant.
In it, the unknown narrator reflects on a previous suicide attempt, many years before.  He finds himself in the woods near his home,

Blue jays flew in and out of the pines.
I delighted at their squawking—thought of tenement
women
Airing laundry on fire escapes.
I wanted to climb the branches for the same reason.

But then, he remembers his father, the things that the flawed man did for the flawed son that were absolutely perfect.  And he waits to be found by that same man. One who he now shares a meal with, realizing what it must have been like for his father to set out the long-ago morning, looking for a son and not knowing what he would find.

…he takes us back
To that morning behind the shed, looking at me
As if I’m a jig-saw puzzle and he’s lost the picture.
I didn’t take into account that he’d blame himself,
That, with or without death, guilt would haunt him.

…nothing rests between us except for our folded
hands.

Stewart’s poems reference jazz as a poultice to old-fashioned heartbreak.  Springsteen gets a nod as does many cultural references unique to rural places that time has left behind. Is it Everywhere? Is it Nowhere? That part of the map is rubbed out.  No matter, the reality is it's Anytown.

Special thanks to Hedgerow Books for the Review Copy.
Posted by Amy at 11:17 PM