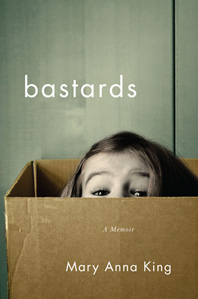 This is the year of the memoir. Really.  I've never noticed so many.  A few I started to get bored with, as they seemed like a lot of navel gazing.    (Except Bettyville by George Hodgman. GO READ BETTYVILLE!!!!!)

Now I knew from the back blurb this wasn't a happy story (the title was a clue too).  What I didn't know was how a memoir could take such a breathtaking pace from sadness to tragedy and back without feeling overwrought.  Mary Anna King tells her story with no pity: she just tells it like it happened, and there was a great deal that happened. From a child's perspective, and without a child's knowledge of how things are supposed to be (only perhaps an intuition), her and her siblings deal with loss after loss. Indignity, shame, addiction, and loneliness.  In the world they live in, pretty much the bad side of various towns in what would be considered the projects, most of the neighbor kids shared similar lives. Mothers with feathered hair and Journey playing solidly placed this in the 1980s.

But the kids:  That they went on to play and forge loyalties and simply exist is a testament to how tough these kids were.  I hate it when people say children are resilient, as it seems a cop-out to excuse unforgivable actions, and because my studies in childhood trauma disagree with that notion.  But these children truly are, even if their lives are forever marked.  They will deal with this childhood forever, no matter how much therapy or blocking out they can attain.

I had tremendous pain for the mother, a foster youth who ended up marrying early and having too many kids way too soon.  She was still a child and had no role model to teach her how to live.  I had no such feeling for Mary's father, a man who seemed devoid of compassion and responsibility.  But Mary, Jacob, and Rebecca earned my admiration for how they existed dependent on each other as there was no one else. They intuitively knew that they could be taken into the juvenile protection system at any time, and so were cautious and watched each other's back. At the same time, they resisted any charity thrown their way as they still were trying to develop self-respect.

The writing is crisp and spare: nothing embellished to enhance the horror.  Simple details reveal far more.  There's even a mini-script for an imagined play that Mary imagines between her parents, and she casts Michael Keaton and Sally Field in the three page script.  An unusual little bit, but a creative offshoot that was not pretentious or overdone.  It's also very fast: I couldn't put it down because so much was happening on every page.

The themes of family and poverty run throughout, as in many memoirs, but the finding of lost siblings is a different dimension. No spoilers, but these children had a bigger family than imagined.

And then there's Mimi, stepmother supreme. I would hope that I would be Mimi if in such a situation.  A composed classy woman who survived the Depression and knew what struggle was.  Sure, she had some big flaws, but the first part of the book I found her to be possibly the one thing that kept these kids going. Until they moved to Oklahoma with her.  I didn't want to be Mimi anymore.

There's so much to say, and so much to admire, but as this author becomes known, I can't wait to read something fictional from her to see if that pace and spare style continues.

Special thanks to Amazon for sending this Review Copy.
Review by Amy Henry.
Posted by Amy at 9:20 PM