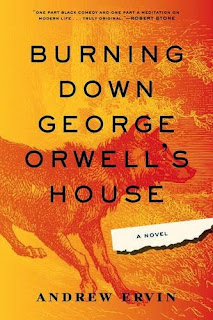 I think everyone has held the “cottage by the sea” dream aloft in our imagination, thinking at times it to be the ideal solution for when life gets messy or our decisions turn out to be disasters.  I can see my cottage so clearly that I wonder where I saw it; what gave me the definite image of the white shutters on the gray siding, the crisp brick chimney placed just so? Climbing roses tumbling down around a small fence, with the ubiquitous Adirondack chair (painted bright turquoise) facing a lovely calm bay? Was it described in a book?  A dubious Hallmark movie?

Or, maybe… was it in an advertisement?  Someone selling paint? Easy-Gro plants?  Detergent?  You may find yourself questioning the origin of your dream cottage (admit it…you have one, if not by the sea, by a lake) when you get submerged in Andrew Ervin’s new novel, Burning Down George Orwell’s House.

Sure, we know that such a fantasy, were it to happen, would be full of inconveniences. It would be completely worth going without electricity, internet, and Amazon just to be able to think and get away from other humans.  And this is the plan that Ray Welter makes a reality when he heads to the island of Jura, just off the Scottish mainland, fleeing both a failing marriage and a dubious job decision as an advertising executive at the cutting-edge firm, Logos. Cutting off all ties to his life, he packs a few books and sets out to find the time and space to think.

“Ray wanted to know again, to be able to delineate right and wrong in an un-deconstructed world of certainty. He wanted to feel the security of binary opposition. Good and bad.”

To be sure, Ray’s cottage is far different from ours in its providence: it was once the home of George Orwell, writer of one of the most readable books on the required reading list of any high school. I studied 1984 in 1984, and everyone in our age bracket immediately understood the significance of Doublespeak and Big Brother.  It seemed extreme, but possible. In the thirty years since, it isn't inevitable, it simply is.

Getting a cold and bumpy start, Welter finds that many inconveniences are eased by drinking whisky and napping. Lots of whisky.  In fact, it appears to be the only thing that keeps Jura functional, and the good stuff is distilled right on the island. The rain is endless, and the few residents he meets are an odd and cantankerous bunch that makes me fear Gerard Butler may be as bizarre and scary as them.  That thought alone should garner a dram of whisky.

While intending to study Orwell and get a sense of what inspired his most original and frightening vision of the future, Welter offends nearly everyone in his journey, until he’s finally alone at the cottage (more like a palace but I've committed myself to a cottage).  And then, with the dream a complete reality, and the nasty world behind him, and the cottage fire going, Welter is surprised to find himself a bit lost, maybe even bored.  Having time to think may not be in his best interests:

“As long as Ray could remember, since he was a little kid running amok in the endless rows of corn, his mind had contained partitioned rooms he knew not to enter; in them were countless self-perceptions better left un-thought about and which generated moods that later in life –particularly after his career at Logos took off – his personal safety required him to avoid. But left by himself for days on end, half-dozing next to a dying fire, with the large amounts of whisky unable to fight off the constant din of the rain, he couldn't help himself from picking open those locks and peering inside.”

Strange parallels of his life twist into irony that is Orwellian.  The first week there, he feels watched, as if every movement is being observed by a nefarious unknown.  And while he wanted to observe that gorgeous and refreshing seascape, the rain blots out any vision: he’s blind to what he’s looking for. Death pays a visit too, as he’s being gifted with disemboweled animals on his porch, attributed quite simply to one of the islander’s being a werewolf.

As werewolves go, this one is pretty wise. He tells Welter, “remember that the difference between myth and reality isn’t quite as distinct here on Jura as you might believe.” This dichotomy plays out in both the scenery and his interactions with the island’s residents in scenes that are often tense but sometimes very funny.

Welter’s study of Orwell is distracted by an abused young woman (of the jailbait variety) and her villainous father who hates all intruders into what he considers the old and traditional life Jura holds (tourists be damned). Change is feared by all on the island, but Welter comes with the mindset of an advertiser, where change is encouraged and necessary to remain profitable, and thus to exist. Strange neighbors, endless sheep, torture by bagpipe, and the arduous terrain keeps him from ever finding a comfort zone, and this is probably the point that Ervin is directing us towards.

This is most telling in a particularly revelatory tour of the Jura distillery, where Welter learns that the process of aging whiskey to perfection has a distinct subtext of living life to the full, in the present:

“The size of the cask and the location, that’s how every malt gets its distinct flavors. And from the geographical location of the distillery and the tiniest variations of coastline and altitude too.”

Whiskey as metaphor.  Of course.  The collision between stasis and change form a battle that goes beyond the novel.  It reels in Welter’s reflections from his time on Jura to his pre-Jura meltdown, even to the times of his childhood where Ervin sneaks in some tiny details that are revealing later.  It extends across economic, geographic, and family connections and surprises with an unexpected lightness rather than despondence.

Well-paced, I had a hard time putting it down to attend to real life. It also occurred to me to check my Jura coffee maker to see if there was a whiskey dispenser I hadn't noticed (there isn't).  You will get thirsty, and if you can muster up a fire in a fireplace, you'll be set.


Special thanks to Soho Books for the Review Copy.

Fun fact: how much is a dram? In other words, how are Ervin's characters able to remain standing with all this whiskey?  According to www.dramming.com, it's about 1/8 of a fluid ounce, give or take 8 ounces or so, depending on your location and mood:

"For personal use, a dram is just the right amount of whisky that you feel comfortable with at a given moment. The size of a dram can be further specified with descriptors ranging from wee over healthy to stiff. Depending on the disposition, mood of the day as well as level of inebriation of the pourer, these specifications may show a tendency to converge at the stiff end of the scale."
Posted by Amy at 11:23 PM