The Goodbye Town by Timothy O'Keefe

...first published in the February 2012 issue of Gently Read Literature at http://issuu.com/gently_read_literature/docs/grl_feb 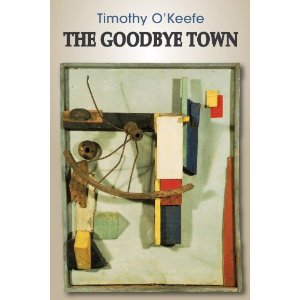 How then, can a cozy name
Betray our need for something
Ultrahuman, polychrome?
…the satellites
Are never coming home. We live
In peek-a-boo stars.
In afterthrills.


If we need color, as Timothy O’Keefe writes above, he certainly delivers it in this collection of poetry that plots the geography of the anonymous landscape in The Goodbye Town. Nearly every poem uses colors to describe a place that feels familiar yet retains a sense of mystery. The use of color in poetry is pretty much standard, but I’ve not read a poet that has used so many variations of color to reflect regret, shyness, and even the “trembly green” of social isolation.

At times, he uses poems to connect past memories to current events, making the reader ponder if change every truly occurs, or if our DNA projects only grim repetition. In “Poem in a Book That Was Never Opened,” he describes the definition of home but ultimately in the past tense:

There was a home
We called it here.
The big lamps burned
And the wind was humming

…We’ll say
The shapes are not bereaved of weight.
We said
The town is not besieged.


This same sense of conflicted memory exists in “The Outlying Counties and Then Some,” where in 27 lines he traces the change from childhood innocence and abundance, where “everyone had a mother then, a working train set” to impending adulthood, wondering “why this quaking in the trees, the winter sidewalks so quick to melt”. It’s with acceptance rather than melancholy that he describes a place that is ultimately “a forgiven landscape, the landscape itself a reflection of the grace that gathered elsewhere.” His gaze isn’t focused on blind nostalgia, but on reality; one that may lack the Crayola memories of youth but instead gains texture and shadow.

The most intriguing part of his book is the unknown identity of A.F. Little, a character that appears in various poems that only hint at who he is or how he relates to the intangible location of the Goodbye Town. Born of violence, he thinks in the color brown and acts childlike, although we can sense advanced age. The bird-like man appears in shadowy poems that depict the sea and warfare, a past in Alban. Is it the fields of Italy or France that have marked him? Even from his ominous birth, the presence of grief accompanies him.

O’Keefe is also a master of knockout lines, phrases that halt your reading as you reverse to read them again:

“penguins never dream of flying, even in water”

“a screen door snaps like a shard of night itself””

“the clothesline whips its sleeves”

In line with this collection, an essay in Windfall (Vol 1, No. 2, Spring 2003) entitled “Form in Poetry of Place,” editors Bill Siverly and Michael McDowell help in describing the unique nature of literature related to location:

"The idea of “place” has been considerably devalued in American culture, to the point at which it functions more as a metaphor than a reality. Few people see themselves as part of a particular landscape…rather, we see ourselves as inhabiting very transportable “places”—look-alike Starbucks, cars, ranch houses, condos, Costcos, concerts, conversations. ”Place” is more of an idea….

“Place” in literature tends to be dismissed as ‘regionalism’ or ‘local color’."


It feels cliché to say that the Goodbye Town is Anytown, USA, but the structure enhances the poems because it anchors them in something we can recognize. Whether or not O’Keefe imagined this place or if it is loosely based on a real small town is immaterial; every mention of a wet road, a windy street, an old tree or an abandoned house locks it into reality. His apt descriptions combine with our memories and somehow, we know we’ve been there. The familiarity can be frightening
Posted by Amy at 12:04 PM