"...the return from war was surely worse than the leaving." 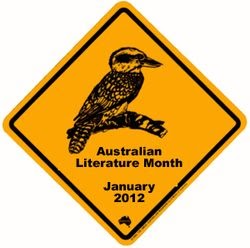 This is the book I completed for the Australian Literature Month, hosted by Kim at Reading Matters.  See her details and overview here.

It's the story of Quinn Walker, who leaves home suddenly and under suspicion when his sister is murdered.  He joins Australia's efforts in WWI, travels the world, and returns with a dangerous desire to go back to the small town that would love to string him up for the crime.

Injured in the War, he suffers from the loss of a portion of his face, injuries from the mustard gas, and all the symptoms of Post Traumatic Stress Disorder. At points early on, it's easy to question whether he is recounting events correctly, or if he's hallucinating, and these ratchets up the tension since either way, it affects his actions. The small town of Flint has suffered during wartime as well, as the Spanish Flu has killed many, and this scarred stranger (as he disguises himself) is not welcomed.

Hiding in the hills, he eventually meets a young girl who, significantly, is the age that his sister was when died.  She's been orphaned by the flu, and is essentially a feral animal that refuses the very protection it most needs.  They make an unlikely and bickering duo, and the details she knows of his sister's murder are disturbing. As he struggles with reality, his injuries, and the impending death of his mother, he's also trying to figure out a way to clear his name, aided only by this little girl who seems to encourage violence with a sinister air.

Or is she?  Or is he imagining it?  Is he tormented by guilt?  What he saw in the War? Where does his reality begin, and the hallucinations end?

This is one book I stayed with an entire long afternoon, and was completely (enjoyably) immersed in the tension and the scenery.  Womersley writes descriptively but without sounding like he's rattling off a list of details....the descriptions somehow mingle into the narrative.  A bit of clumsy foreshadowing early on led me to guess the plot fairly easily, but the author still threw in some unexpected twists and complications. The characters of Quinn and Sadie are complicated and compelling; the other main characters a bit more stereotypical (one a generic bad guy).  The beauty of it is in the prose: concrete, detailed, yet fast-paced.  There's suspense in every interaction between Quinn and Sadie, which is really hard to pull off.   Realistically, guessing the plot was irrelevant--the creation of unique characters is where the author's gift is clear.

Womersley has a previous book, The Low Road, that I will look for next.  He reminds me a tiny bit of Tim Winton in the apparent knowledge of the Australian landscape and its feature, but their voices are completely different.  I wouldn't be surprised if this novel was someday made into a film...it has all the elements that would make a suspenseful and visually beautiful film.


Special thanks to Nicci Praca of Quercus Books, UK, for the Review Copy.
Posted by Amy at 2:15 PM