The Circle, fiction by Manolis 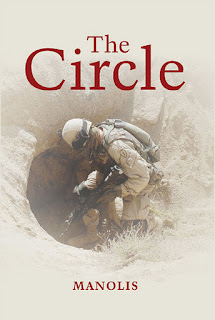 This is actually the second time recently that I've read a fiction novel written by someone I'd only known as a poet, and this departure for Manolis proves that a poet's eye  may add detail a novelist may initially miss.  The Circle is about the lives of many affected after 9/11 and how their actions are changed due to the event.  Yet, the narrative takes this outside the typical American perspective and looks at it from the viewpoint of Iraqis whose lives were altered by the bombings and warfare that followed.

Often, the poignant storyline becomes uncomfortable, because it's so different from how our media and Western mindset portrays the events.  Introspection seems inevitable, as characters, both from Iraq and the US, behave in ways that the reader has to question.  The underlying current of the novel looks at the CIA's involvement in Iraq pre-9/11, and how innocent citizens were affected so dramatically.

Hakim is the protagonist, a student saved from the rubble and now a succesful American businessman.  He's a curious sort, because despite his wealth and success, he's categorically unemotional and distant.  The author intends for us to examine why that is the case.  The most fascinating character to me was that of his similarly wealthy uncle Ibrahim, who adopts him as a son when his parents were killed.  Throughout the story, I was debating with myself if Ibrahim was villain or hero, and of course, the answers are never that easy.

One thing that annoyed me a little was that both of the female characters that had significant roles in this novel were incredibly shallow and, shall we say, dumb as paint.  Given their own histories, their interaction with political circles, and being eyewitness to some of the horrors, it would seem they'd have more to say, or at least engage in some sort of meaningful interpretation.  To describe them as blindingly ignorant is not an exaggeration!  After giving it some thought, I suspect that was intentional  on the part of Manolis, and a way to subtly assert that many Americans may have a similar thought process when it comes to the more difficult questions and situations in life.

In places, parts of the story are rough going as they demand the reader to consider the future in view of past history, and this can be disturbing to acknowledge.  Overall, however, I think this is a viable subject and angle to look at the post-9/11 world and disrupt any prejudices one may unwittingly hold.


Special thanks to Libros Libertad for the Advance Review Copy.
Posted by Amy at 2:31 PM