Translated from the Russian by Christopher Mattison 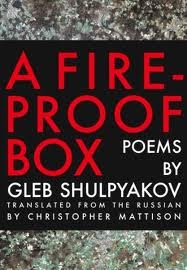 Interactive poetry-complete with questions and answers (and a few prompts)-make up this collection from Gleb Shulpyakov.  The collection is personal, as he tells you about himself immediately in the section "Flick":  "I mean, I simply don't know where to begin, so I loiter, like a school boy hanging out after school...."  In his poetic 'loitering', he throws out images and ideas and creates parallels you don't expect.  Then, he teases you a bit by questioning what he just laid out.

In one sense, Shulpyakov is a painter, using words to create a vision (and even mentioning Vermeer so we get it right):

Evening, sorrowful as snow in a painting
(late Vermeer, unsigned and dated)
in an aged scrawl).  A lamp in the middle
of the room.  The ticking clock

is audible at snowfall's end.
Classics staring back from the shelf.

What can we add to this painting:
a hot flame in a Hollandish fireplace?
a pair of borzois on a bearskin rug?
ringlets? festoons? patchouli? pastels?

A map of a country on a stand?
A checkered floor in perspective?

By the end of these verses, he's went from creating the vision to questioning the stereotype of it.  Small villages he describes seem quaint, yet then he mentions the statues of tyrants that lend a sense of foreboding to the image, and the quaintness implies hidden suffering.  The quiet is less serene.

He creates another unforgettable image in the following poem, made poignant by the hints at passing time found among the words 'waves', 'fades', 'moths', 'silhouette', and 'end':

A white Viennese chair sets against the sea
and you--time fades in the landscape's
evening waves.  Sculpted cheekbones in profile
and a child's sand-plastered shovel.

Sunset over the sea!  Tragedy's classic
moment.  Silently gazing out to a point,
I see not you, but a color--and in it your
silhouette.  And this point is not an end.

The poet writes to the reader, not necessarily for the reader.  The sense of conversation is intense at times, even when it is often humorous.  He mentions names from art, history, and politics, and assumes you know what he means (more than a few I didn't....thank you Google!).

That summer at the dacha I wrote a play...
Something from the classical genre:  love and the seaside.
And a pistol must be feared near the finale.
Each day, after flipping through more journals,
I headed up into the garret.
I opened my laptop and all the heroes
poured out at will:  babbling and dashing around.
You know what it's like to write a play?
You give them words and they create a ruckus--
quarreling with each other
barely enough time to keep track of them all!

I tripped over my words in reading this, I thought he meant that the pistol must be fired...as in Chekhov's gun rule, which states that if a pistol or rifle appears early on in a story, it must be fired or the audience is left uncertain.  It's a form of foreshadowing called repetitive designation, and given that Chekhov and Shulpyakov are both Russian, I thought immediately of the connection.  But this wording, 'feared' instead of 'fired', gives another dimension.  Feared can mean revered or venerated (besides dreaded), so perhaps this is a nod to the violence of Russia's past and how necessary it seems in literature to add the conflict of violence to make a plot work.

The bilingual edition is lovely to look at...I only wish I could read the Cyrillic alphabet and hear it as Shulpyakov wrote it!


Special thanks to Canarium Books for the Advance Review Copy.
Posted by Amy at 12:05 AM