As an experimental novel, you can’t get more creative than Aaron Dietz’ Super, a witty look at what it takes to become a superhero. Oh yeah, you’re thinking. Superhero? We definitely could use a few more, but who knew the selection process was so difficult? 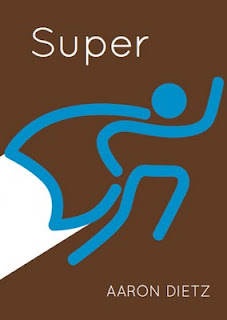 Super combines literary elements, such as short stories, poems, and a stage play, with the most mundane types of paperwork, all part of the application process. Superheroes in our decade must, of course, sign liability waivers, undergo psychological testing, sign non-disclosure agreements, and have their costume approved by numerous agencies (an Extra-Sensitivity Committee will examine the costume to make sure no one could possibly be offended by it). It’s all tongue-in-cheek yet completely earnest, as Dietz mocks our litigious society and the redundancy of bureaucracy. Clearly, strength and courage are not enough.

The fill-in- the-blank forms and handwritten memos give it a spark of realism. Random diary entries and animation blocking mix with the Fictional Scenarios that a potential hero must correctly navigate. Equipment diagrams, coworker assessments, even the Word Find that is found in each issue of the fictional monthly Superhero Journal fill out the pages and remind us that even Superman would not likely be hired under the guidelines that most employers have to follow. Is Dietz making a dig at the corporate structure of big government and big business? Is he quietly advancing Adam Smith’s “Invisible Hand” economic theory?

It's clear that for all the qualities and intentions a person may possess, society often ties the hands of those who want to help.  Aid workers are prevented from entering ravaged war zones to help, restricted by political forces.  Just last week in San Francisco, firefighters and the Coast Guard were unable to save a man, possibly suicidal or delusional, who waded into the chilly water of Alameda Bay, just a few feet deep, because of bureaucratic policies that didn't permit shallow-depth rescues.  A 'regular' guy went in for him, but it was too late-the cold water killed him.  Dietz hints at this discrepancy between right and "legal".

Underneath the clever visual elements lie some startling observations about humanity today: in one scenario, the Superhero wannabe gains extra points by showing basic kindness to a homeless person or babysitting a highly allergic child. He seems to want to show us how occasionally we may perform some pretty neat superhero tricks on our own.

In all, it’s enjoyable to see the clever features and the complete randomness of much of the book. However, I’m curious as to the intended audience for it. My assumption is that it could be considered a young-adult title, but would that reader necessarily catch the irony of all the paperwork? I ran it past two boys who, at 18 and 21, are fond of superhero movies, and both of them hated it. Perhaps it’s meant for an older demographic that fuels the demand of nostalgic and novelty items from classic cartoon heroes. This was a sticking point for me, as I wasn’t sure how to interpret it outside of my own opinion, which was that it was clever and cute but not something I’d choose to read. The lack of a clear narrative made it feel more like a magazine (aka MAD magazine) than a novel. By the second half it was as if the punch line was already revealed, and while more experimental motifs were explored, the freshness had worn off.


Special thanks to Daniel Casey for the Review Copy.
Posted by Amy at 11:38 AM