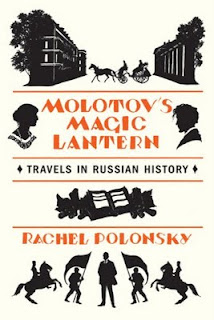 Rachel Polonsky is a British journalist who enjoys a dream trip to Russia to explore Moscow and the city, and even stay in a historic apartment building.  She's there to research another topic, but is intrigued by how much history actually lived in the building she temporarily resides in.  Most notably, one floor was home to Soviet bad guy and Stalin pal Vyacheslav Molotov (and yes, sadly, every time I say his name I think of that Don Henley song: "Molotov cocktail, the local drink, and all she wants to do is dance").  The opulence of the street in the past, as well in the present, speaks to the contrast between impoverished Russia and luxurious excess.

As she settles into the apartment, she begins sleuthing around to discover that other important Soviet residents had lived in the building or nearby.  Trotsky, who fell from favor in his later years, lived in No.3.  As he was to be exiled, she notes the events surrounding his departure.  The apartment life, while plush, was tense.

"...'prominent Soviet workers' would learn to keep the doors closed, not to look out when they heard the heavy tread of boots on the common staircase at night, the commotion of arrest in a neighboring apartment" (63).

Polonsky's travels spread into the streets and outside the city.  I most enjoyed the chapter "Staraya Russa" that described a spa town that promised restorative health benefits, and that was eventually a summer home to Dostoevsky where he wrote extensively.  Tracing the history of the town through other writings, and visiting significant locations, she reveals a place where the wealthy went with great hope, enthusiastically applying the mud deemed curative for a wide variety of ailments.

Later in the book she explores modern Russia under the realm of Putin.  One tidbit: "the latest fashion in chic Moscow eating places is to order numerous elegant dishes and leave them on the table hardly touched.  Almost everything on the menu costs a week's pension" (366).  She notes that the Russian upper-class is heavily focused on appearances and status, something she connects as a common thread throughout the previous two centuries.  "Putin's courtiers are more interested in their jackets, their watches and their coiffures than in any God-bearing mission of the Russian people, whatever they may say to 'the people' each night on the TV" (367).

Covering a vast amount of subject matter such as contained in the book makes it overwhelming.  Even with a better-than-average (but by no means scholarly) grasp of Russian history, the vast amount of names and places and events are hard to put into the context she gives.  For example, to look at a random paragraph and see a dozen or more personal names, street names, neighborhood names and previous nicknames of the same place confuse the story she's attempting to tell.  It's as if there is simply too much information given, with little distinction between a significant detail and a minor one, as both are given equal weight.  The effect is jarring, in that it's difficult to fall into the spell of the events without feeling like you need to Google a few dozen names to make sense of it all.

I think her extensive knowledge of Russian history gets in the way of clearly enjoying the book.  When she's making an important point about bourgeois attitudes, she gets sidetracked into a tangent that meanders awhile and sometimes doesn't seem to reconnect with the original point.  When I put down the book and later returned to it, I often felt as if nothing was familiar, and that I needed to go back several pages to recapture the narrative.  A devoted Russophile would likely be delighted with her experiences as relayed in this book, but for most of us, it's simply too much "who, what, and where" without enough 'how' and 'why'.


Special thanks to Katie Freeman of Farrar, Straus & Giroux  for the Review Copy.
Posted by Amy at 12:05 AM