As you begin this new book of poetry by Charles Martin, you’re given the direction to look at the words “signs” and “wonders” in a particular light: signs being used as a noun, while “wonders” is to be used as a verb. A small detail, but one that makes a significant impact on the reading. The implication is that Martin is offering, not complete and finished expressions, but little riffs on which to ponder and reflect upon. 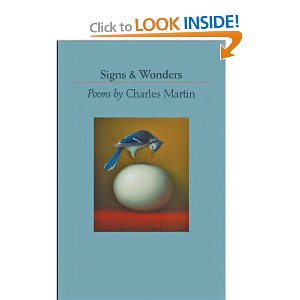 My first impression was how varied the poems are-some are short, almost just an observation rather than a poem. Others have a limerick quality, while a few extend to pages of rhymed couplets. For some reason, I was predisposed to think of this as “serious” poetry, but in fact, I giggled uncontrollably at a few of them (“The Spaniard”, for one).

His topics also vary, and yet the whole remains cohesive. One example is “Brooklyn in the Seventies”, where at first it appears he’s waxing nostalgic about thriving real estate and restoring brownstones, and then it pivots to discuss the variations in marriage-the times of tearing down and renewal. The parallels are uncanny and truly lead you to wonder:

Yes, selves were in a frenzy of commotion,
And those beyond their expiration dates
Were being tossed despite years of devotion
So whether by one’s doing or by fate’s
One found oneself in an unlikely place…


My favorite is “Ovid to His Book”, in which the ancient poet imagines sending to one of his books Rome to somehow regain his entry to the city from which he’s exiled. In the poem he counsels the tangible book as to proper decorum and strategy:

Go on your way now, book, and speak for me
In places that I love, but cannot be,
Saluting those whom I have come to meet
On metrical, if on no other, feet…


When biting words offend you, just recall
The best defense is often none at all,
And if you’d really have my exile end,
Go find us both an influential friend…

“After 9/11” is likely to be the most moving of the poetry in the book, as Martin relays the emotions and actions of New Yorkers at the moment of the tragedy and in the aftermath, searching for loved ones. Yet he goes in a different direction, noting that at one time, Manhattan was the site of a battle of George Washington, and that buried bones are not uncommon. Rather, they form the foundation of the island historically and culturally, and create “a sublime alignment of the present with the past.”


In total, Martin covers a dramatic amount of subjects: George W. Bush, art, the “unreal” pain of a poet, endangered animals, and suicide. In doing so, he makes thematic comparisons that are never cliché or trite. Only one title, “Poem for the Millennium,” left me lost-I didn’t know what to make of the style and phrasing that was evoking the events of the year 2000.  I sense a meaning too deep for me to ascertain!  Perhaps if I pick it up again at a later date it'll make sense to me!

It must be added that the cover of this book is one of the loveliest I’ve seen…I hope the picture shown expresses just how beautiful the physical book is.


Special thanks to Kathy Alexander of Johns Hopkins University Press for the Review Copy.
Posted by Amy at 8:28 PM