Years ago I was obsessed with more general titles of mass fiction, particularly crime and detective novels. I didn't realize there was better reading to be found.  I admit that Jeffrey Deaver and Patricia Cornwell were favorites.  And while there is nothing wrong with mass market fiction, it quickly felt stale.  Most of these authors also tried to up the shock value within each book in what inevitably was made into a series.  With life being hard, I realized I didn’t want to read such depressing and at times depraved reading.  That’s when I focused on lesser known authors and titles, with a draw towards translated fiction. 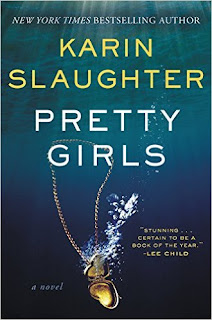 However, recently I was sent an ARC of Pretty Girls, a book that promised a deep mystery about a serial killer. I don’t know why, but I fell for it. One lazy afternoon, I curled up with it.  At first, the premise was intriguing.  A father of a missing daughter is writing a long letter to her, to let her know what she missed while absent. Not knowing whether she was dead or alive, he persisted.  From that we see the rest of the family and how they reacted to the loss. Two remaining daughters go in different directions, forever marked from the loss and the constant wondering about her whereabouts.

The sisters, Claire and Lydia, are as different as possible. One tough and able, moving forward despite addiction issues and violence.  The other, simply checking out of life to let her amazing husband make all decisions for her and spending her time as a socialite. Both women still seethe with rage but keep it hidden.

Now, stop if you are wary of spoilers. I won’t be too specific, but I will try and explain why this is one of the most appalling books I’ve ever read. Instead of giving up, I had to continue reading to see if it was truly as awful as I imagined.  It was.

After Claire’s husband dies, her life unravels quickly, and it’s discovered that her husband was not as he seemed.  She handles this by falling apart, finally reaching out to her distant sister Lydia (found urinating on his grave) to help her figure out what to do. From here the novel dissolves into a violence-soaked whodunit wherein both sisters fight and argue while at the same time trying to solve the problem and see if they can find their lost sister too.  Improbability becomes the underlying theme.

Claire is an especially bizarre character: smart but without a shred of emotion (except tennis-invoked rage).  She’s benign and boring, and her existence is pinned to her outrageous beauty. She’s unsympathetic and spoiled. Her beauty is mentioned endlessly, as Lydia's chubby body is as well.  I'll get back to this, it's important!

What ensues next is an urgently-paced effort to find the killer, one who rapes women with machetes and uses waterboarding with his own urine as torture.  Yes, you read that right.  Branding, dismembering, burning skin: ho hum. It becomes so common, in nearly every page, that one stops being shocked.  And that’s what disturbed me the most.  I felt sick, like I was contributing to such violence just by reading this.  Was it giving potential serial killers ideas?  Was this misogyny intended to make us reflect on the 'wonderfu'l sisterhood that tries to rid the planet of the monster? Or reflect simply on horrifying images?

Did the female author find it necessary to use this to fuel our interest?  To show that women are most often the victims of violent crime? Maybe she had a message, but it’s lost in the violence itself.
One thing especially stood out: nearly all the women in the story face such brutality. They are graphically described by their body parts, what happens to them, and inventive ways to torture them. They are literally in pieces.  Unlike anything you think you’ve seen on Forensic Files or any number of horror films. And they are categorized with generic labels: either beautiful, or fat, or well-dressed, or frumpy, or rich, or poor. No further explanation or revelation. Labels.  From a female author, that was a surprise.

And yet, the men. The men in the story remain fully functional.  Their bodies are not chipped away at. They are not described in such helpless positions with no way of escape.  They remain whole, despite a literally countless women hanging from cattle hooks, disemboweled, and violated.  In fact, the only real comment the author makes about the men in the novel is her strange obsession with their mustaches, commenting significantly on every single one.  The men are also not given superficial labels.

Of course, this “mystery” is of the “no one can be trusted” variety and yet very little makes it where you care. As it appears, beyond the suspension of disbelief,  everyone is a criminal.  It’s too vast a conspiracy with little explanation for how it began.  Events in the first part are never tied to latter parts. Motive is what appears to be lacking.

The author then tries to solve it and tie it up in a few last improbable chapters that are actually laughable.  The sisters try and save each in other in a last ditch effort at unity but are so dazzlingly naïve that you want to smack them yourself. It was a tiny bit refreshing that the problem is solved by two women rather than the inevitable bored male detective who usually comes in to save the day. But that's not enough to salvage this gory mess.

And of course, everyone lives happily ever after.

I’m off mystery novels like this now for a good long time, if not forever.  A violent world surrounds us, so sinking into this sewer of ugliness is not going to make anyone feel good. Except perhaps a serial killer who is bored and looking to up his game  (for which this may serve as a "how to" manual).  It’s that awful.  I don’t know how popular this author is, probably very, but in my small little voice I have to say what she’s written is as disturbing and hateful and as misogynistic as anyone could be accused of being.  She’s not done a service for women by creating characters that solve crime and empowering them. Instead,, she’s created women that are eternal victims, who even in their victory are disappointing and weak.  That itself is a crime.

The author's last name? Slaughter.  Go figure that one out.  If it's a pseudonym, I can't imagine a more apt one.

Thanks, but no thanks, to Century Publishers for the Review Copy.

If you are in fact desirous of some good suspense novels that aren't this gory, I'd recommend a look at The Devotion of Suspect X by Higashino, any of the Benjamin Black "Quirke" series, Klausen by Maier, The News Where You Are by O'Flynn, or any of the other titles listed under the Fiction tab above, or leave a comment if you wish.
Posted by Amy at 11:06 AM