In the Language of Miracles by Rajia Hassib 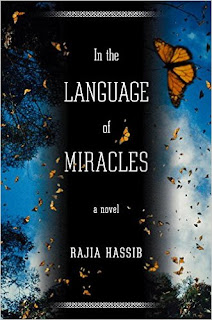 The writing in this is so subtle. While it's a family drama, it reads like a mystery because the author holds her cards to her chest and doesn't reveal everything all at once. We know that two teenagers have died but the circumstances are shrouded in mystery.Add to that the cultural differences: an Egyptian family living in suburbia that is essentially exiled after the deaths. Their Muslim faith is in tatters because their new country and the hostility from the deaths has made them outcasts. I doubt many Americans realize the harsh treatment and degree of extra scrutiny a Muslim family has to deal with everyday, much less after a tragedy. I enjoyed hearing about their traditions regarding faith and hope.What I find most intriguing was the grandmother who comes from Alexandria to visit. I want one of her at my house. She's so comforting, wise, and calm. I think every house should have one! At one point she makes an Egyptian pastry --shoreik -- that is traditional to eat in remembrance of the lost. Others find it annoying that she makes a huge amount to take to the cemetery and then shares with everyone she meets. That was kindness and loveliness combined...true comfort food. The father, Samir, annoyed me to no end. I know his type of man and he's so insecure that he feels he must impress people but ends up embarrassing his family. He cannot see his flaws. To me he was the antagonist in the story, even though the real antagonist seems to be mental illness. Nagla, the mother, seemed most real to me as she grasped with the loss of a child and the loss of her comfort in the US.Yes, mental illness is an issue but it is brought into the story later. Hidden, like it is in many families. And that is the key to the story. The author never goes off on a tangent to become a psychologist to explain it away, she just explains how others are affected. I hate when authors try and psycho-babble their way through the plot as if to enlighten the reader. Most readers are well aware. Instead, hearing how day after day the other family members coped was far more intriguing.

Advance Review Copy provided by Viking via Amazon Vine.
Posted by Amy at 11:42 AM