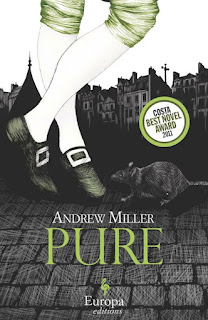 Jean-Baptiste Baratte is a modern man, well-versed in Voltaire and ready to leave his peasant upbringing behind. Eager to display his engineering talents, he meets the minister at Versailles to receive his first significant appointment. Confident, composed, although a bit cocky, he really can’t foresee any challenge his enlightened education can’t overcome.


But, all his plans of illustrious success are somewhat hampered by the assignment he receives, one that is couched in a veiled threat. His job will be to demolish a dangerously aged Medieval church as well as removing the entire cemetery attached to it, on the Rue de Les Innocents. The minister explains,

It is poisoning the city. Left long enough, it may poison not just local shopkeepers but the king himself. The king and his ministers.


It is to be removed.


Destroyed. Church and cemetery. The place is to be made sweet again. Use fire, use brimstone. Use whatever you need to get rid of it.

Given such a grotesque assignment, he quickly realizes that the challenge lies in more than just removing bodies. The task itself is monumental, given the crowded city and the few who wish to work on such a gory task. Baratte hesitates to begin, and as he settles in to his new job, he finds avoidance is his first impulse. What better  time to buy a new suit and get drunk? A fashionable pistachio green suit that is purchased by trading in his father’s dark classic suit is a symbolic gesture that sets the scene for his new undertaking, and his new pal Armand, organ player at the Church, shows him exactly what and how to drink in order to forget the dead he’ll soon be faced with.

Thus, the novel begins, with Baratte and Armand and several other characters dealing with the sentimental and awkward removal of a beloved church. Each character is fully developed, and fascinating in the way they interact. Besides the intriguing plot, just seeing the ensemble of unlikely individuals become close-knit among grave circumstances makes the narrative surprisingly enjoyable. Virtually everyone changes in some way, and none more than Baratte.

But are his ambitions what they were? Are they, for example, less ambitious? And if so, what has replaced them? Nothing heroic, it seems. Nothing to brag of. A desire to start again, more honestly. To test each idea in the light of experience. To stand as firmly as he can in the world’s fabulous dirt; live among uncertainty, mess, beauty. Live bravely if possible. Bravery will be necessary, he has no doubt of that. The courage to act. The courage to refuse.

Given his thoughts above, you may imagine the fate of the pistachio suit.

The story is unique and clever, and astonishingly fast-paced. I’m not normally a fan of the historical fiction genre, and I’m completely unfamiliar with this period in French history, but I was completely absorbed. However, I have to mention, in hopes of assisting others, that some reviews of the book (most notably the New York Times) seem to imply a supernatural element, of vampires and some sort of wolf-spirit. I didn’t get that at all. One strong wind was described as howling like a wolf, but that’s it. Two well-preserved bodies are inexplicably uncovered in the removal, but no indication or allusion is made to them of being vampires. So, while there is madness and community resistance to Baratte’s assignment, there’s nothing that feels otherworldly about the story.


Special thanks to Europa Editions for the Advance Review Copy.
Posted by Amy at 2:31 PM