The Disappearing Spoon: And Other True Tales of Madness, Love, and the History of the World from the Periodic Table of the Elements by Sam Kean (release date 7/2010 from Little Brown) 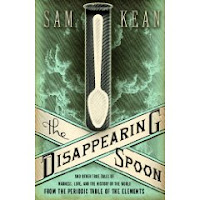 I have to confess I didn't pay much attention to chemistry.  Once the instructor talked about electrons, protons, atoms and the nucleus I usually turned on my Walkman (the cassette kind, now antique!).  It never seemed interesting because it wasn't something that related at all to real life.  If I had a teacher like Sam Kean, however, that could have been different.

Fast forward too many years, and now I'm engrossed in this nonfiction 'memoir' of the Periodic Table of Elements.  Like any good biography, this has scandal, lies, fraud, madness, explosions (!!!) and lots of name-dropping.  Kean explains just what the periodic table is, but in a format that reads more like a novel, with anecdotal details to liven it up.  Mercury pills were used by Lewis and Clark for their health?  Yep, and you can trace their path (um, at least their bathroom trips on their journey) by where scientists have found unusually high amounts of mercury in the soil.  The poet Robert Lowell?  Did lithium ruin his work by making him sane?    Who knew the lies and fraud and mind games played by scientists intent on getting a Nobel Prize!

There's no getting around it, this is a book that makes you think.  It's not simple and it assumes you have a basic knowledge of science.  Some areas were over my head, but not for long.  Kean is a wonderful teacher with a sassy wise guy voice that livens up any of the deeper areas.


Special thanks to Kelly Leonard of Little, Brown (Hatchette) Books for this ARC.
Posted by Amy at 11:15 PM